We are delighted to announce that our Second Annual Christmas Online Auction is now live and will close at 9:00 pm on December 6th.

Thanks to very generous donations from the public, our volunteers and corporate sponsors, we have on auction some fantastic items that will cover a wide variety of tastes and interests.

Many of the items would be very suitable Christmas presents and are already gift-wrapped – just perfect for the busy lifestyle!

You have proven that… HELP is in YOUR hands…it’s in ALL our HANDS! 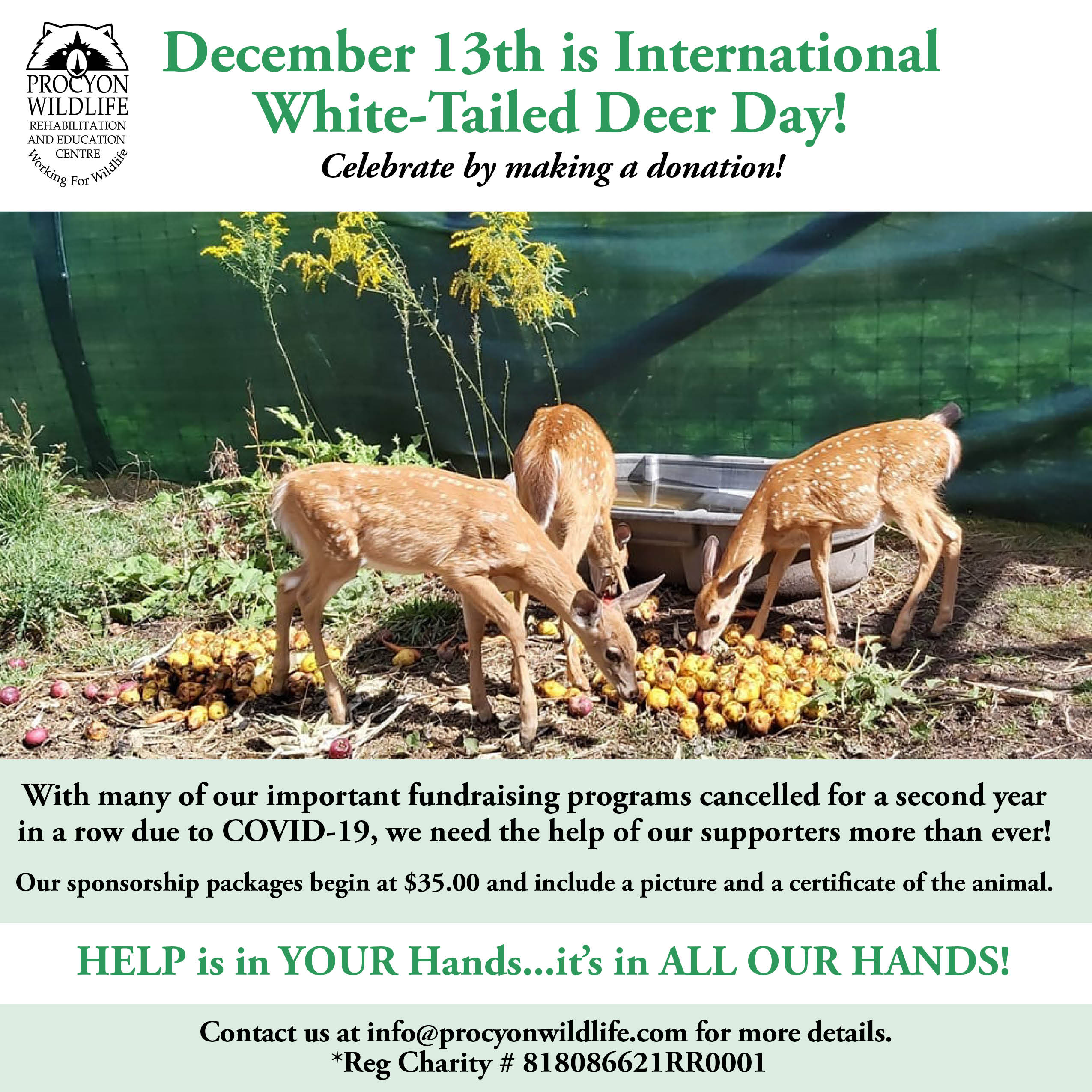 December 13th is White-Tailed Deer Day!  Are you now thinking of Bambi, frolicking through a meadow in the hinterland, or prancing through a secluded forest?  It might surprise most people to find out that many deer live in and around suburban areas.  Just because they are rarely seen, doesn’t mean they aren’t in our neighbourhoods.  They are out there, all through the GTA, closer than you realize!  Here, at Procyon, we are quite aware of that because many injured local deer are brought to us for medical help.

Deer are skittish animals – high-spirited and easily scared.  When rehabbing these animals we make sure we have as little contact as possible with them as it is very important that they keep a healthy fear of humans.  We provide a very large, natural area for our deer to move around in, so it is sometimes difficult to find them each day to bottle feed, tend to wounds, or provide medications!

In Ontario, we have the northern white-tailed deer, one of 3 species found in Canada.  They are the smallest species of deer in all of North America, with adults weighing between 90 (females) and 300 (males) pounds.  These animals used to live in the southern parts of the province, but in recent years their range has moved further north due to milder winters as well as environmental and habitat changes brought on by humans.

Families of deer live together in groups called “herds”.  However, smaller groups that are not big enough to be called a herd are referred to as a “parcel”!  Depending on the type of deer, babies are usually called “fawns”, females are “does” or “cows”, and males are “stags” or “bucks”.  These animals travel together in herds or parcels, often in same-sex groupings.

Fawns are born in the late spring, usually just one or two babies at a time.  They are able to stand on their own shortly after birth, though they are quite unsteady on their long, skinny legs for the first couple of weeks.  A fawn has reddish-brown fur with white spots on its back.  The tail is short, with brown fur on the top and white fur on the underside.  It has huge ears, big dark eyes and a black nose.  As it ages, it will lose the spots on its fur.  The average life span of a deer is just a few years, though it can live into its teens.

Both parents help in the raising of the fawns.  Momma does the feeding and poppa does the protecting from predators.  A momma leaves her little ones in a protected place for several hours each day while she goes out foraging for food.  The babies are born scentless, which makes them safe from predators while momma is away from them.  Sometimes, well-meaning humans, thinking the fawns have been orphaned, wait near them, watching to see if they need help.  Big mistake!  Momma won’t return until she knows that it is safe from predators.  And we are predators.

Check out our live feeds!

Pay via PayPal or Interac!

HELP is in YOUR hands… it’s in all OUR hands!