This past autumn, an opossum with head injuries (most likely hit by a car) arrived at the Procyon Wildlife Centre. He required a lot of care, and finally yesterday he was ready to be released back into the wild.

He originally came from an area, where one of our volunteers resides, so he was released on their property.

It is particularly crucial that adults be released in an area with which they are familiar since they already know where their food sources are located.

This rather large male opossum was in a nest box, which was placed in their forest. A dish of tuna was placed next to the door of the open nest box.

At 8 pm, the volunteer’s spouse went out and saw that the opossum had poked his head out of the nest box, and was munching on the tuna.

An hour later, this gorgeous boy had disappeared into the forest. He is actually quite a handsome possum (the photo doesn’t do him justice), and we wish him a good life.

With ticks being really bad this year, he will have plenty eat! 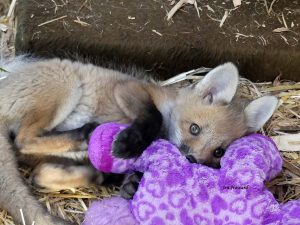 This is the story of baby fox kit Talitha! Cared for, released back to the wilds by Procyon Wildlife! So proud to see this beautiful video by DODO!