Every year, Procyon Wildlife is hopping with Sylvilagus floridanus – that’s the Eastern Cottontail Rabbit!  They are rescued by concerned citizens, brought to us, usually as infants, and never stay for very long.  They grow quickly, so once we are sure they are able to fend successfully for themselves, they are released back to the wild.

A female rabbit, called a “doe”, has up to 5 litters every year with anywhere from 3-10 babies per litter!  Yikes, that’s a lot of rabbits!  The doe builds a shallow nest on the ground for her newborns, which are called kits.  I remember my husband finding a nest while he was mowing the lawn.  He saw a small patch of dead grass and when he lifted it up, there were several newborn baby rabbits underneath!  That also happened to a man in our community.  Only the babies were a bit bigger and his mower cut off the top of an ear from one of the babies.  The man brought the bunny to Procyon where we named him Vincent and took care of him until he could be released.  I love those happy-ending stories!

Kits are born with their eyes shut and have very little fur.  Their eyes start to open when they are around 4 days old.  Within 2 weeks, the kits start to explore outside of their nest and by 4-5 weeks, they are ready to strike out on their own.  By 2-3 months, these rabbits are considered adults, ready to start breeding themselves.  Oh, yes, lots of rabbits!

Rabbits can be found in both rural and urban areas.  Some rabbit species live in underground tunnels called “warrens”.  The Eastern Cottontails, which are common in Ontario, make their homes in hollows at the edge of wooded areas, often under brush or bushes.  This provides escape from predators, while being close to the more open areas is where they find their food.

Being herbivores, a rabbit’s diet consists mostly of greenery – grass, lettuce, leaves, herbs, twigs, tree buds, and dandelions.  Their teeth never stop growing.  They also love to nibble on treats from people’s gardens!  Funnily, most people think that rabbits like carrots or that carrots are good for rabbits.  Not so!  You’ve been watching too many Bugs Bunny cartoons!

If you are eating your lunch as you read this, perhaps you should finish your meal before reading further.  You see, rabbits are coprophagus.  Their diet is quite fibrous and difficult to digest.  Their bodies can’t absorb, in a single digestion, many of the nutrients in the foods they’ve eaten, so this partly digested food needs another go-around.  So rabbits eat their own poo.  Not all of it, just the first bit that’s green and moist.  They leave the scat that looks like little brown pellets.

Rabbits are known for their long ears.  What’s neat about them is that they can be rotated 270°!  Each ear works independently so that different noises can be picked up simultaneously, up to 3km away.  That’s a wonderful defense mechanism when the rabbit has so many predators.  But that’s not all the ears do!  They are also responsible for regulating the rabbit’s temperature.  Its ears have a vast network of blood vessels that dilate when the rabbit gets too hot, allowing heat to escape from the ear surface.  Conversely, when a rabbit is not warm enough, the blood vessels constrict, shrinking the ears in order to conserve heat.

The list of rabbit predators is long.  Maybe that’s why they breed so copiously – so many species depend on them as a meal!  Predators include coyotes, red fox, dogs, red squirrels, weasels, hawks, owls, crows, falcons, kestrels, snakes, ferrets, badgers, and stoats.  One of the worst predators is humans.  In order to avoid being caught, rabbits will stand still in an effort to go unnoticed.  If that doesn’t work, they run very quickly, often in a zigzag pattern.  Although rabbits could live for up to 7 years, many do not live beyond a year due to predation.

A question often asked about rabbits is whether they are diurnal or nocturnal.  They are neither.  Instead, they are crepuscular.  This means that they are most active at dawn and dusk.  Many rabbits will forage when it is dark to avoid predators, though mothers are usually out during the day while tending to their newborn kits.

Rabbits are often confused with hares.  Although they come from the same Family “Leporidae”, they are of a different Genus and Species.  Differences between the two species include that rabbits are smaller than hares, are born helpless, have shorter ears, smaller feet, aren’t as fast, are more social, and do not experience seasonal colour changes.

Over centuries, some rabbits have been domesticated.  They were found to be a tasty meal, reproduced prolifically, and were much smaller than most livestock so people could keep them in their homes until the next mealtime.  Being the cute, quiet, fluffy animals that they are, I am sure that over time, people came to just enjoy their presence.  It reminds me of when I was travelling in Peru and found that people kept guinea pigs in their homes, then when company came for dinner, bye bye Fluffy.  Apparently guinea pigs are quite the delicacy in Peru.  Not kidding….

Rabbits are lovely animals to have as pets.  My daughter had one named Stew.  Really.  But please be aware that there are “pet” rabbits and there are wild rabbits.  Not only is it illegal to keep a wild animal for more than 24 hours, but the wild animal will suffer if you try to tame it.  They just aren’t bred to be pets.

There are a few different ways you can celebrate “Sponsor a Rescued Rabbit” month.  One way is to actually sponsor a rabbit through Procyon Wildlife. Because rabbits usually stay with us for only a few weeks, their care isn’t very expensive, so sponsorship starts at just $35.00.

In your Sponsorship Package, you get a certificate and a picture of the rabbit.  And, of course, the heartfelt thanks from the little bunny (you’ll have to use your imagination for that!).  Your donation helps in the cost of its rehabilitation including food for the time it is with us, as well costs associated with medical procedures.  Another way to sponsor rabbits in our care is to drop off bags of Timothy hay and Timothy cubes which rabbits need on a daily basis in order to stay healthy.

I will leave you with some hokey rabbit jokes.  Have a lovely February!

What do you call a group of rabbits hopping backwards?

What do you call a happy rabbit?

What’s the difference between a healthy rabbit and an odd rabbit?

One is a fit bunny, and the other is a bit funny!

How can you tell when a rabbit is getting old?

Look for the grey hares!

How does a bunny keep his fur neat?

With a hare brush!

What do you call a rabbit that has fleas?

Where do rabbits go when they are feeling sick?

What do rabbits use after the shower?

What animals are scared of vacuum cleaners?

Note from the Editor: Check out this video which was produced by student volunteers, Yankee, Jennie and Michele, as part of the Leaders of Change Project.
“If you see a bunch of baby bunnies, with no mom, leave them alone! She will come back! Mother knows best!”

Due to the necessary social distances measures taken as a result of COVID-19, many of our baby animals are being fostered out to experienced Procyn Wildlife volunteers. Here are some pics of bunnies being cared for by one of our Procyon foster parents! 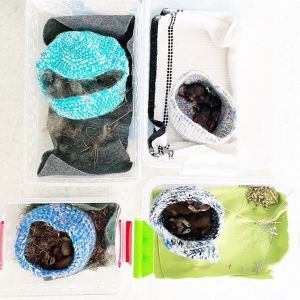 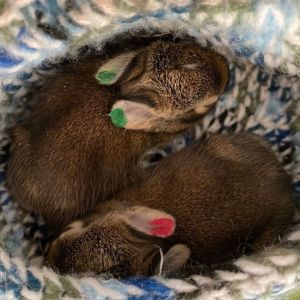 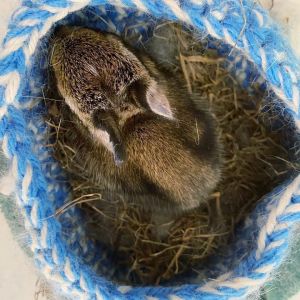 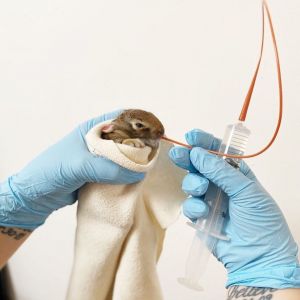 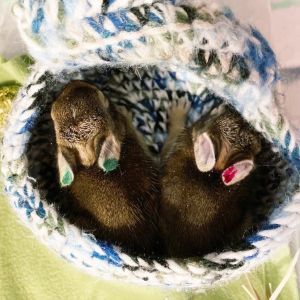