This article from the Alliston Herald features the success story of Everett the Fox who had a serious case of mange. Kind hearted citizens from Everett grouped together to capture this fox so that he could be successfully treated at the Procyon Wildlife Centre. Recently Everett was released back into the wilds near Everett. 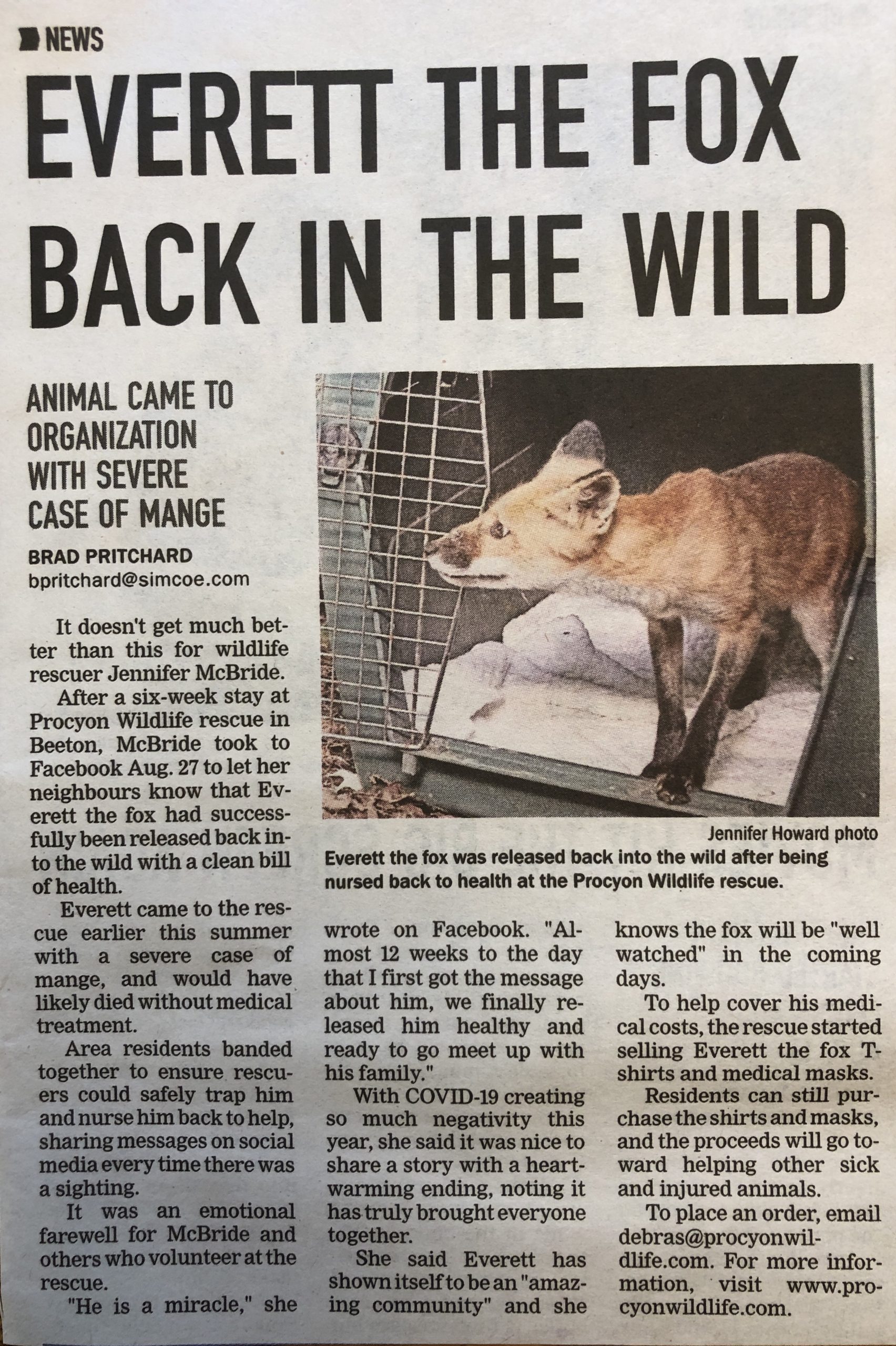 As releases are in full swing here at Procyon Wildlife, other animals are coming in injured. Young babies are still showing up as well. It’s been a bizarre season with our wildlife critters.

Update on our fox Everett: He was released on August 27th and it was a wonderful release. He is free. He came out slow then took off. He was home and he knew it. We are selling Everett tee shirts and masks. Go to our website to order yours. Follow ordering instructions. Proceeds go right back into animal care.

This month I have decided to tell you about two animals that have touched our hearts dearly. Both raccoons; Norton and Captain Lucky. Both had horrific injuries.

First, I will tell you about Norton. Norton is from Loretto. A young raccoon found wandering around a backyard. Water was put out for him, but he didn’t touch it. Our volunteer Jen McBride was contacted and proceeded to set a live trap. She found him curled up behind the shed, nose very red. No one knows what really happened to him, but his face was a mess. His nose was so severely damaged that his nose was gone and his teeth damaged.

Norton was admitted on June 25th, during Dr. Rebecca’s first official week with Procyon Wildlife. She is one of our dedicated and amazing vets who provide their medical skills to help wildlife in need. She was able to use small iv tubes to rebuild his nostrils. He had to be sedated for the procedure. Some of his teeth will fall out and adult teeth will grow in, which is already happening.

Unfortunately, his nostrils closed in again two weeks later so the procedure was performed once more. Since Norton needed a lot of care and meds, he was fostered out to receive round the clock care. Having to be sedated when he was handled, he has had a lot of procedures, however, the little young raccoon has been a trooper through the whole thing. He even escaped up a tree for 12 hours. His foster mom Jen M had to climb up after him to get him back. She had to keep swabbing his little nostrils to keep them open. It was a lot of work, love and care looking after him. But he is recovering amazingly well, is happy, has his buddies to play with and keep him company.

He absolutely loves his hammock; do not mess with Norton in his hammock. That is his space. His very happy space. The best thing ever is his nose is healing well now, the pigment is growing back in slowly, and he can smell. So, the consensus is he will be able to go free again.  I am pretty certain he is going to never want anything to do with humans again. It’s been a rough road for this young raccoon. But he sure is bouncing back from whatever horrible thing happened to him. Possibly hit and dragged by a car, but we are not sure. One thing about wildlife is they do bounce back if given the chance with proper care and medications.

So, make that call and help them if they are injured and in trouble. Their life is worth it. But never feed them. Just make them comfortable and keep them quiet and warm and call us or whichever wildlife rehabilitation centre is nearest you. Visit Ontariowildliferescue.ca for a full list of all the rehabbers out there so you can find one closest to you. But make that call and save that life.

And now for our second horribly, injured raccoon, from the west Sutton area, between Sutton and Pefferlaw. He was admitted recently, with a serious injury to one of his hind legs.  This is his story.

Our vet, Dr. Rebecca, treated him as well. She came in to examine him and what she found was awful.

Little Captain Lucky, as the finder called him, had a snare tightly wrapped around his leg. It was copper wire, embedded right to the bone. It was the worst thing we have seen in a while since Norton came in. He was still using his leg, however, his foot was mostly gone, he had chewed on it to get free.  The pain must have been excruciating. His body had worked hard at trying to heal itself.  It was not a very fresh wound and it would have surely gotten infected, going into his bloodstream, causing sepsis, so he probably would not have survived.

He was found by a kind-hearted husband and wife who, before Captain Lucky’s injury, had observed him with his mother and 3 siblings. Then one day, strangely, he was spotted alone, and the husband discovered Lucky’s leg was so swollen he couldn’t even see his foot. It turns out Lucky had been caught in an illegal snare trap. For how long we don’t know. This is the cruelest thing and how anyone can do this to an animal is beyond words anyone can say.

The trouble is your pets or even small children could find these traps as well. I would suggest dogs being on a leash and being careful in this area, keeping cats inside.  This poor innocent young raccoon was trapped and was able to chew his way out. But the snare was still attached. And wound tightly around his tiny leg. The pain and suffering must have been horrific. Yet he kept going. 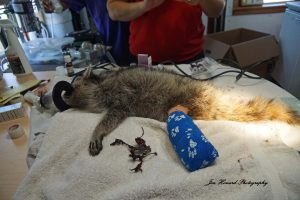 Once again, Jen McBride, one of Procyon’s dedicated volunteers got on it. They pretty much watched when Lucky would come around for food. So, Jen set the live trap. He was caught and brought in very late one night. Luckily, he was able to be seen by the vet very quickly. While he was under sedation, Dr. Rebecca removed the wire that bound his leg. She cleaned it well and wrapped it up. But it was not all good news. Captain Lucky was going to have to have his leg amputated. This young raccoon did nothing to deserve this horrible, mean, painful and severe injury, stuck in the trap for who knows how long. He was not only in major pain, but he must have been terrified. And he is just a baby. He could have bled to death, he could have been taken by a predator, he was all alone and trapped. Losing his mother and siblings; all he knew at that time. The surgery was discussed and booked for the following week. His leg was coming off.

Apparently, approximately 3 years ago or so, there was another illegal snare found, in the same area, the finder told me. She fears for her cats and for her 31/2-year-old daughter. The trap presumably could be within a kilometre because with his injury such as it was, Lucky could not have travelled far with that injury.  It could be in the field surrounding their yard. MNRF was contacted. And the police as well. This is an illegal act by someone.

August 28th pm. Dr. Rebecca came in to do some checks on a few of our animals. Lucky was on the list. He got his onesie removed and his staples were taken out.  This time he fought the sedation, but we won that one. Poor guy. But his reward was he got to go to an outside enclosure. No more medication, no more onesie, no more sedation. As long as the healing continues as it is he will be fine out there. The volunteers prepared his enclosure with a pool and nice straw and his own straw-filled barrel for his bed. Nice warm and snuggly. With a sign that read. 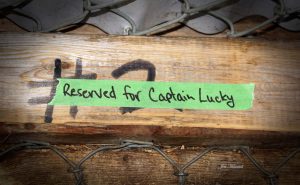 Reserved for Captain Lucky, above the door. Lucky’s big moment. He walked in the pool, stood there, and grunted a bit when his neighbours, the welcoming committee, in the adjoining cage, all lined up to greet him. It was the cutest thing ever. The little noises raccoons make and then Captain Lucky’s grumpy grunts back. He sniffed the air; he checked the welcoming committee out a bit, then he did what raccoons do. He climbed. Our 3-legged raccoon climbed up the enclosure. He hung there checking the world out upside down and hung on with 3 legs. Captain Lucky is going to be fine. Later that evening he had climbed up into his nice warm house and was snuggled in for the night. 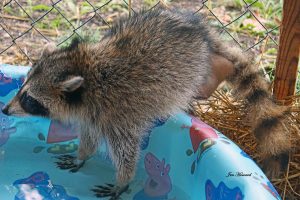 Although his leg still needs to be monitored closely for a bit, Captain Lucky is free now to be a raccoon, climb, swim, just hang out. And he has company on both sides of this enclosure. some of whom will be getting released soon, but for now, Captain Lucky is definitely one very Lucky little raccoon.

One last note on Captain Lucky. There is an organization called The Fur Bearer Defenders.  https://thefurbearers.com/

They are in the process of releasing a poster on Captain Lucky. And are offering a $1000.00 reward on information leading to the conviction of whoever set this illegal snare trap.

Remember, if you see an animal in need, make that call.