Soon, in September, these amazing creatures will begin their migration back south.

Although some hummingbirds fly over water, from Florida to the Yucatan peninsula, most migrate around the Gulf of Mexico, through Texas and northern Mexico to winter in Central America, some even as far as Panama.

Wishing our little friends safe travels and a safe return this coming May of 2021!

Photographer Bob Scott’s commentary on his photo of juvenile hummingbird: “Right place at the right time”…

We have a bunch of hummers that are very active these days, constantly chasing and annoying eachother – central to the feeder. Noticed one flight on the other side of the house as it approached a window and looked like it wanted to land on the drapes inside…no real impact, just persistence. I had a ladder up by that same window so the hummer settled on the top of that instead. Not a typical, manic flight for a hummer…more of a struggle.

I got closer and it appeared to be quite tired and very small (even by hummingbird standards) so I’m assuming it’s very young and just figuring things out. Grabbed the camera and a few frames. It hung around for another ten minutes or so then fluttered off.

I detect slight greenish hue behind the head so possibly an immature female…just a guess.  Note the rivet head on the ladder is 7/16″ diameter for scale. 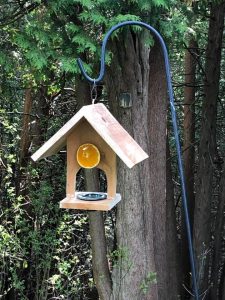 One of our volunteers recently posted on FB that she hadn’t seen Baltimore Orioles at their country property in years. Apparently there are increased numbers this year, which is wonderful news. These colourful exotic birds are a real treasure and the male’s birdsong is simply breathtaking.

When she and her husband spotted a male drinking from the hummingbird feeder just a few days ago, they built an Oriole feeder just in case he might hang around.

Once the feeder was completed and hung up outside it didn’t take long for Mr. and Mrs. Oriole to take part of the orange slices and nectar. Orioles apparently also love grape jelly! They have a real sweet tooth.

The post promoted some very important tips for our readers concerning the type of nectar that you should give hummingbirds and orioles.