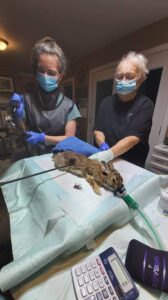 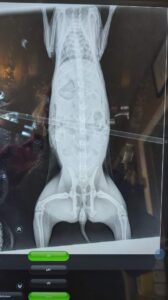 Everything that is possible is done for animals who are admitted to Procyon. At times, regardless of what we do, animals cannot overcome the illness or injuries that they arrive with. Such was the case of this rabbit who came in with an arrow driven right through him. The arrow was a target arrow and there is no doubt that it was intentional. Such a senseless act to shoot such an innocent animal.

A huge thank you to Dr. Nelissa, after a full day of caring for animals, worked diligently to save this bunny, but unfortunately the arrow went right through his two kidneys, so he had to be euthanized. This has been reported to the MNR and other authorities.

Procyon has started a fund to raise enough money for the Centre to buy its own Xray machine so that injured animals that arrive can be x- rayed immediately and not have to wait. We are hoping that we can raise enough money through donations to be able to accomplish that. Thank you to those who have already donated. We have a long way to go but appreciate every donation we receive.

HELP US RAISE FUNDS FOR AN IN HOUSE XRAY MACHINE

Rabbit shot with an Arrow
Powered by Ultimate Auction Pro