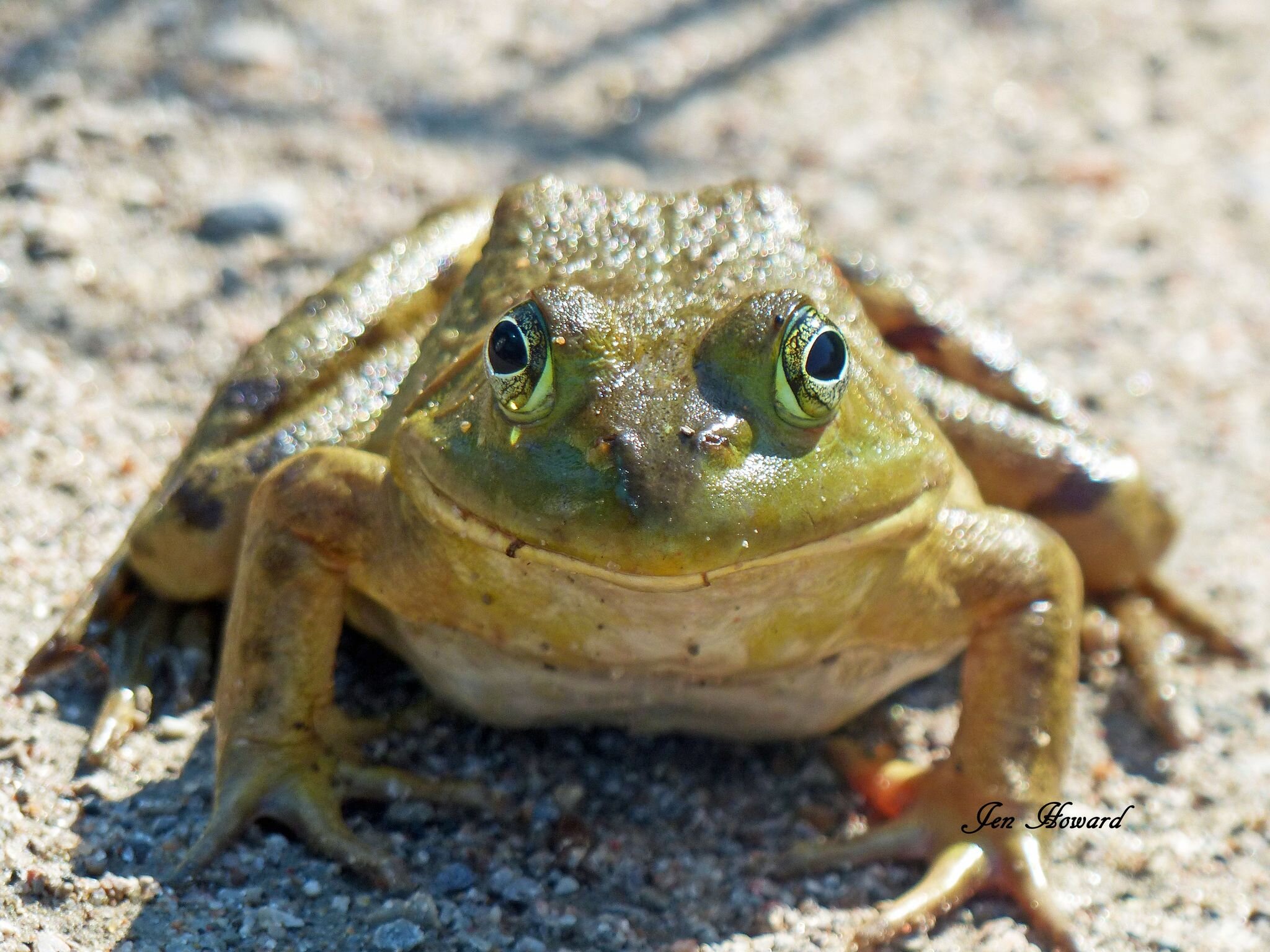 May 13th is a national day for celebrating jumping frogs!  Where did that come from?  Well let me tell you!  It originated from the first published story ever written by Mark Twain, way back in 1865.  “The Celebrated Jumping Frog of Calaveras County” was based on an actual annual contest that was held in California, the first being in 1828.

Now, I am not at all promoting frog jumping contests.  What started as a seemingly harmless pastime for country kids almost 200 years ago gained speed, and has turned into a major tourist attraction in California, with thousands of competitors every year!  The contest has frogs making a triple jump, vying for the longest distance travelled.  Back in 1986, the winner was Rosie the Ribiter, with a jump of over 21 feet.  She won a prize of $1500, and to this day, she holds the record for the greatest leap.  Prize money of $5000 has been offered to any frog that can break Rosie the Ribiter’s record.

So why is this seemingly innocent contest getting environmentalists so upset?  Because people are itching to win, so they are using larger bullfrogs that are not indigenous to California.  And what happens to the thousands of losing frogs after each event?  They are let loose in California, disrupting the natural ecosystem.

Perhaps if people were more aware of the damage that happens when introducing non-native species to a habitat, they might be more careful.  And if people also realized the benefit these amphibians provide to their native ecosystems, they would be less inclined to move them.  So let’s learn about the life of a frog.  First off, some people confuse frogs with toads.  They are both amphibians in the same Order of “Anura”, however, they are in a different family.  Although there are many different species of each animal, there are some generalizations that might help people tell them apart.

Frogs have a smooth moist skin, with slim bodies and long legs with webbed feet.  Their mode of movement is by jumping, and they are found in, or close to, water.   Toads have dry, bumpy skin, a rounder body, they crawl rather than hop, and are found more inland than frogs, so they do not need to have webbed feet.  And just so you know, you can’t get warts from handling a toad!  But do beware, toads do have glands behind their eyes that secrete a toxic substance which is used to help defend themselves from predators.  At most, it will give humans an allergic reaction, so make sure you wash your hands well after handling toads.   And keep Bowser and Fluffy away from them.

Do you remember hearing your math teacher telling the class that a square is rectangle but a rectangle is not a square?  That is a true statement (yes, I am a retired teacher!).  Another true statement is that a toad is a frog, but a frog is not a toad!  Which makes it somewhat difficult to report on just frogs, especially since there are over 400 species of them in the world!  In Ontario, there are 13 types of frogs – 2 classified as toads, 5 classified as tree frogs and 6 classified as true frogs.  So let’s just look at the true frogs that are hopping about the streams and land of Ontario.

The 6 species of true frog are the Wood, Leopard, Pickerel, Mink, Green, and Bullfrog.  They grow to be about 5-8 cm long, nose to backend, with dorsal ridges down their backs.  The exception is the Bullfrog that grows to twice the size, and does not have dorsal ridges.  That is the species that is captured and entered into the frog jumping contest in California. Their colours range in shades of brown, green, and yellow, often with splotches or spots of a darker colour on their backs, with a lighter coloured belly of white or pale yellow.

The vocalizations of a frog can be a quack, squeak, snore, grunt, twang, or croak, depending on the species, and depending on what they are communicating.  Males will croak during mating season, and if they are particularly enamoured with a certain lady friend, they will croak even louder!  The noise also lets other males know that they are infringing on the suitor’s territory.

Frogs mate in the early spring by hugging.  Aaahhh, how sweet!  OK, there is a bit more to it than that.  But that’s all the physical contact they have.  The male gets behind the female and wraps his arms around her in bear hug….no…. a frog hug, called “amplexus”.  They usually stay in this position for around 20 minutes, however, it can be hours or even days.  As the female lays thousands of eggs in the water, the male drops his sperm on them.  Once that deed is done, most species of frog, both male and female, just head off into the sunset.  Quite the parenting style!

So the fertilized eggs are left on their own to go through the process of metamorphosis.  After floating in the water for a couple of weeks as a clump, referred to as “frogspawn”, little tadpoles emerge from the eggs.  They look like sperm, with a round head and long tail.  These little fellas spend the next 3 months feeding on water vegetation, growing not only in size, but in shape as well.  They gradually develop limbs, lungs, and skin, while the tail slowly becomes shorter.  It is at this point that they move from the water to the land.

Oh, but I must tell about two species of frog from Australia that barf up their babies!  Yes, I kid you not.  This process is referred to as “gastric breeding”.  After the male fertilizes the eggs, the female would ingest about 40 of them.  The stomach becomes the place where the eggs grow into tadpoles and then into froglets.  So momma frog can’t eat for that period of time – about 8 weeks.  With her stomach quite full of babies and cramping her style, momma finally vomits the froglets, one at a time, over a few days.  If she was particularly agitated, she might projectile vomit all of them at the same time!  Isn’t nature so interesting?  They were first discovered in abundance in 1973.  Sadly, about 10 years later, they were declared extinct, possibly due to humans spreading a fungus to them.  Heavy sigh.

Back to the life of frogs….  As the froglets mature, they change from being vegetarians to carnivores.  Gone are the veggies.  Their main diet consists of insects, snails, and worms.  They are mostly nocturnal, feasting on all those bugs that emerge in the early evening.  Frogs have long, sticky tongues that dart out from their mouths quickly and with remarkable accuracy!  Instead of chewing their food, they push it down their throats with their hands.  Some species of frog will also eat fish, snakes, and small mammals.  Some are even cannibals!  Yes, they will feast on their own species!  You’ve heard of a dog-eat-dog world?  Well, it’s a frog-eat-frog world out there!

It takes 2-4 years for a froglet to become an adult.  Lots can happen in that time.  Remember I mentioned that a female lays thousands of eggs?  Maybe 10 end up maturing into adult frogs.  The rest become dinner for predators that eat the eggs, tadpoles, and froglets.  Frogs are prey to many different species of birds, reptiles, and mammals.  Their lifespan in the wild can be quite short, though do live in captivity for up to 20 years.

Frogs hibernate for the winter – some under water in mud, some in the ground, others on the forest floor under tree or leaf litter.  There is even one species, the wood frog, that goes into a deep freeze.  It stops breathing and its heart stops for the full winter!  Come spring, it thaws out and hops off on its merry way!

What would we do without frogs?  As mentioned, they provide great benefit to our environment.  They do this by dining on insects that many of us not only find a nuisance, but that also carry parasites and diseases.  Their skin secretions can help in treating humans ailments.  Tadpoles keep our waterways clean by eating the algae.  Frogs, at all stages of metamorphosis, play an essential role in the food web as many other animals in our ecosystem call them dinner.

Something that is very important for humans to understand is that the health of frogs mirrors the health of our environment.  Frogs begin life in the water, and they need water throughout their lives to survive.  But they don’t drink it.  Instead, their skin absorbs it.   This would also include absorbing all the pollution in the water.  So if the water is unhealthy, then the frog will not grow into a healthy adult.  And not only water gets through the skin.  So do the pollutants in the air.  Unhealthy frogs mean an unhealthy environment for all species, including humans.

At this time, the frog population is decreasing by about 4% every year.  This is due to pollution, loss of habitat, climate change, and invasive species.  The frogs are warning us that our environment is in danger.  We need to listen to them.  We can do something about that.  What can you do, you ask?  Learn about frogs and share your knowledge, observe best practices for dealing with recycling and compost, petition governments to preserve habitats, join a nature group, grow only native plants to your area, don’t use chemical pesticides, and create a frog-friendly environment on your property.  Keep in mind that you will need water for breeding and tadpoles, hiding places like rock or brush piles that are moist and in the shade to protect their skin from drying out, and create a garden that attracts the type of insect that frogs eat.

Procyon Wildlife rarely treats frogs at the rehab.  But what we do have is a great educational program where school children and community groups learn about different species and what they can do to encourage best practices for keeping our wildlife healthy.  Please consider a donation to our Educational Outreach program so we can help spread the word on how to keep our frogs and other critters healthy and safe.