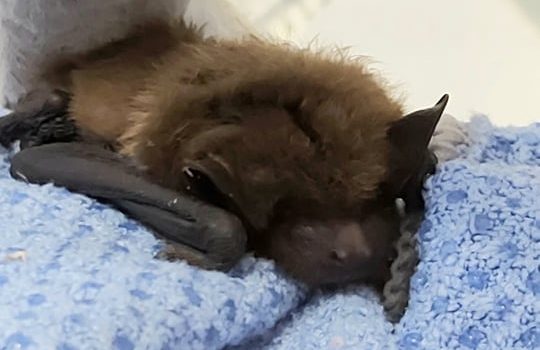 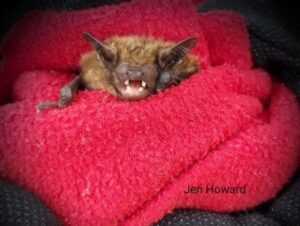 Bats… by Debra Spilar
We have 13 bats already this year and it is only the beginning of the year. The weather certainly confuses them out of hibernation when we have warm spells, then the cold comes and they get too cold to fly and are found on the ground. We will keep them, care for them, and release them when spring is upon us. Until then they will be snug as a bug.

Interesting facts…..
* Bats are flying creatures of the night, not much bigger than a house mouse.
* Bats can live up to 10 years.
*The wingspan of the two most common Canadian species (the little brown bat and the big brown bat) ranges from 20 to 35 cm (8 to 14 inches), though some can be larger.
* A single brown bat is very beneficial: it can easily capture 600 mosquitoes each hour. A colony of 500 bats can eat a million insects nightly.
* Bats are not aggressive, although like any wild animal, they may bite to defend themselves if handled. A bat that appears to be baring its teeth is actually ‘scanning’ you with its unique method of echolocation – building up a picture of its environment by using a type of sonar, which is mostly inaudible to humans.
* Seeing bats flying around your area in which you live is actually a good sign as bats are indicators of a healthy environment. Bats need places to roost, clean water to drink and lots of insects to eat, therefore seeing bats around suggests that your local area has lots of good habitat that will support a whole range of wildlife.
* In Canada all of our bats only feed on insects, they are also very shy creatures and therefore have no interest in humans, in fact where possible they will avoid contact such as roosting in parts of a building that are undisturbed and away from people. Occasionally bats do fly in through open windows but only by accident and if this happens they will try and find their way back out again. This means that they will fly around the room looking for that open window. If, after a while they cannot find their way back out they will tire themselves out and settle somewhere to rest temporarily. This will be somewhere hidden away like behind a curtain or a picture frame, so they feel secure.
* There are many reasons why a bat may be found on the ground, for example it could be dehydrated, come out of hibernation early and gets too cold or have been attacked by a cat. Bats are not normally aggressive but they are wild animals and therefore like any wild animal we would always recommend that gloves be used when handling the animal to contain it. Then call Procyon Wildlife 905-729-0033 to make arrangements for us to admit it into the centre to be treated and cared for.