Note from the Editor: The following article originally appeared in the October 2019 issue of British Driven, a newsletter for the Headwaters British Car Club, based out of Orangeville, Ontario. Mr. Ed Taccone, also known as Mr. Ed has graciously shared this article with us. In light of the news concerning the rapid temperature rise and the effect this will have on our climate and our very way of life, we felt it was relevant to share with our Procyon Wildlife readers.
Sincerely, Angela van Breemen, The Editor.

Last year, my wife and I travelled to Costa Rica which is approximately 650 miles from the equator of our planet. We spent two weeks absorbing the very different world of Central America. Having never been to Costa Rica we were surprised with its lush jungle greenery, beautiful birds, different species of animals, gorgeous coastlines, great food and friendly people. This gave me a rare and unexpected occasion to converse with Mother Nature herself after being left alone while the others decided to visit the beach. 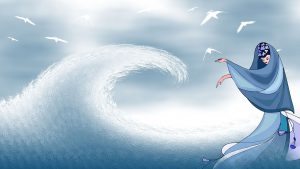 Of course, we all know Mother Nature to a certain degree, since She made us from scratch and provides for all of our needs for every second of our lives. But She actually keeps Her eyes and ears down there, probably because that is where the greatest concentration of living things, hang out. The Sun is at its most intense, and there is more biodiversity in a single square kilometre of Amazon rainforest than you’ll find in Canada in its entirety.

So anyway, I ran into Her while walking down the path from the Hacienda where we were staying, through the jungles of Costa Rica. I was very pleased that Mother Nature granted me an interview. With the secret environmental mission of this article in mind, I decided to focus most of my questions on climate change (global warming), since that is probably the biggest risk we’ll face over the next few generations. The transcript below recounts our conversation.

Mr. Ed: Thanks a lot for the interview, and thanks for everything you do. Your fine bounty is really what makes life worth living, for all of us.

Mother Nature: No problem, and thanks for caring. Since all living things are really just rearrangements of my own atoms, you are all my children, and thus my own reason for living as well.

Mr. Ed: So, how do you feel about all the damage we humans have been inflicting upon you in recent centuries? Are we at risk of destroying you?

Mother Nature: (LOL) Goodness, no! I’m far too big to ever be destroyed, short of being thrown into the Sun. But what you humans do risk, is destroying your own bountiful way of life.

Right now, your prosperity is provided by a plentiful supply of clean air, water, food, and energy. Although some of you like to take all the credit for this, it’s really my ecosystem that does all the hard work: the plants, animals, oceans, air currents, and especially the atmosphere. Without these services, you would lose your ability to create the food and products that form your current prosperity.

And due to your volatile, heartless nature at times, even a slight drop in resource availability tends to cause major fighting, wars, and dictatorships.

I will be fine either way. And life will always find a way to flourish on my surface. Even some humans will probably continue to exist, since some of you are so very clever. The question is simply how many billions of you will die in the great adjustment if you mess up the free ride you’re getting right now?

Mr. Ed: Sure, that makes sense. But pollution levels have been dropping in the richest countries as we enact better controls and technology. Heck I’m even paying for carbon taxes from my retirement fund. Won’t we eventually clean up our act?

Mother Nature: Pollution, such as soot, chemicals, agricultural runoff in streams, radioactive materials is one thing, but these things wash away quickly once you stop dumping them onto my surface. So yes, pollution controls have a quick effect on human well being.

That said, what you’re missing is carbon. As in the surplus of carbon dioxide you’re pumping out through coal power plants, farms, chopping down billions of trees, and all your gas-burning machines. This has the potential to warm poop up around here, with bad results for you. By my estimation, you’re already more than half way to emitting enough carbon dioxide to create that serious multi-billion-person disaster. But because it’s a rampant game, you’re within just a decade or two of reaching the end of it. You can pay all the carbon tax money on my beautiful Earth, but it’s up to every individual on Earth to show restraint with how they pollute.

Mr. Ed: Carbon dioxide? But isn’t that a natural part of the environment? We all exhale it, plants inhale it, oceans absorb it, volcanoes belch it, and the concentrations have varied greatly throughout the history of the planet. Your climate has warmed and cooled many times in the past. During your Snowball phase about 650 million years ago, your entire surface, including the oceans and right down to the Equator, was frozen. At other times, there was subtropical vegetation on Antarctica. The first human habitation of North America itself was made possible by an ice bridge from Asia, which melted at the end of the recent ice age. Isn’t change just part of the program around here?

Mother Nature: Well, you got part of it right:  Carbon dioxide controls the climate. The difference is how quickly you have cranked it up in the last blink of an eye. In the past, change happened over many thousands or millions of years. Even then, it was catastrophic to many species, killing out some, relocating others, and expanding those who were tough enough to survive and adapt.

In this case, you’ve gone berserk overnight and are still cranking up the speed. This means a lightning-fast rise in temperature when you think in my time scale – faster than many plants and animals can adapt to. That will take a chunk out of your ecosystem, and remember that the ecosystem is the basis for your nice way of life. Without it, you’re no longer rich.

Mr. Ed: OK, so there is that. But maybe we can use our rapidly advancing technology to compensate. And the temperature thing couldn’t be that bad either, right? I live in Caledon, and a few extra degrees would be nice in the winter so I could plant some Orange trees in my back yard. In fact, most of your land mass is in the North and fairly far from the equator, such that we might even end up with more productive land if the climate warmed. Canada and Russia are still mostly empty in their Northern reaches.

And what do you say about the naysayers who deny that global warming even exists, generally speaking up every time about of unusually cold weather strikes?

Mother Nature: You sound like an oil executive right now. But let’s get things straight: first of all, we call it climate change because the changes are unpredictable and happen in various ways. On average, “I am getting warm fast”. This means there is more energy in store, which lifts more water vapor from the ocean and pushes it around with stronger winds. Bigger storms, more intense snowfalls and rainfalls, more severe droughts, and just more surprises in general.

As for the warming of previously-frozen areas: this is true: you’ll get more farmland up there in the North. But more farmable land will probably mean even more natural ecosystems being chopped down. Meanwhile, you will also lose a lot of your best stuff down South as it becomes too hot or dry for farming.

And even more importantly, you’ll lose your current coastlines, where the most valuable cities are. Because even a tiny warming of the poles will melt enough ice to raise the entire sea by several feet. There’s enough ice on Greenland alone to raise all the oceans 20 feet. And guess what? It’s happening to Greenland right now! If you melt even a fraction of my big ice reserves, you will flood out billions of people, which will cause you great expense, famine, and fighting.

Mr. Ed: Funny you should mention more intense storms. The past two years, the GTA and other parts of Canada have received record amounts of precipitation.  This caused the creeks, rivers that runs through towns and cities to swell. Several people were swept away, bridges washed away and hundreds of houses and businesses were flooded.

It’s costing record amounts of money to rebuild from all the flooding. I can’t help but wonder what other, better uses we could have put such a huge sum of money to use for. On a worldwide basis storm damage is increasing rapidly and the cost is in the trillions.

Mother Nature: You got it. Events like hurricane Katrina, Sandy, Dorian, and flooding will all become much more common as the climate warms. It takes energy to move all that water around, and you’re just storing more energy when you trap heat with the greenhouse effect of carbon dioxide. And the fancier your cities and houses are, the more expensive it gets when big storms wipe them out.

I can’t help but notice that your greater Vancouver area, one of the most expensive chunks of seaside infrastructure ever built by humans, sits right at sea level and could be completely under water within a generation based on current ocean rise.

Mr. Ed: WOW! maybe we had better try to slow down the climate change after all. But we’re more or less addicted to fossil fuels, as they do all the work for us. If we reduce their use, we slow our own economy. What can we do?

Mother Nature: Nonsense! You’re talking in that Exxon voice again. There is enough energy in the sunlight that strikes my surface in an hour, to power your whole seven billion person belching smokestack of a world economy for more than a year. Of course, you can’t harvest it all, or even one hundredth of it. But this is about a nine thousand-to-one safety margin, before you even get into any other source of power.

Mr. Ed: All right, let me go and run the numbers on this. Maybe there is a way that modern, smartphone-loving, jet-aircraft-flying humans can still achieve peace with our own planet while still maintaining a booming, high-tech economy, bringing more prosperity and happier lives to the billion or more people still in deep poverty, and still be able to have just as much fun as we do right now. Hmmm, do I fly or walk home?

An Interview with Mother Nature