Our second animal of the month is the opossum, and October 18th is their special day.  This animal is unique for many reasons.  For one, it is the only marsupial (carries babies in a pouch) in North America.  It also doesn’t have a specific territory – it is always on the move.  But the most amazing thing about it is that it lived way back in the dinosaur age!  Scientists know this because their fossilized remains have been dated at 70 million years old!  Wow – extremely unique!

An opossum looks like a giant, grey fuzzy rat.  It is extremely adorable as a baby, but over time, it will start to look a little scruffy.  It has big round furless black ears, small black eyes, and a white furry face with a pointed snout and little pink nose.  The cute little face becomes a lot less cute when it opens its mouth to show 50 very sharp teeth!  And an opossum has this habit of showing who’s boss by keeping its mouth open for long periods of time when it is trying to look intimidating.  Let me tell you, it works!  Its feet have opposable thumbs on the hind legs, and it has a long, hairless tail that is able to curl around tree branches.  An adult is about the size of a cat, is nocturnal, and does not hibernate.

For the first few years that I volunteered at Procyon, we never had an opossum.  These last two years we have had many come into our care.  This past summer, most of the babies came in with their injured mothers.  Momma is the best option for ensuring that the babies survive, and they are all housed together in a comfy enclosure until momma is well enough to take her brood back to the wild.

Opossums are very different than your average mammal.  Females might have up to 3 litters per year with over 20 babies being born each time!  They give birth after less than 2 weeks of gestation, with the infants still looking like embryos.  The newborns are so small that 20 of them could fit into one teaspoon!  These joeys climb from the birth canal into the pouch using a swimming motion.  There, they attach to a teat and stay in that place, nursing, for the next 2 months.  Unfortunately, momma only has 13 teats, so those that don’t latch on first, will die.

At about two and a half months of age, the baby opossums’ eyes open, and they move from the pouch.  They will cling onto momma’s back as she goes about foraging for food.  From this vantage point, the young ones learn first hand how to survive in the wild.  The babies become independent by the time they are 5 months old and will start having babies of their own by 8 months of age.  Mmmm, that means that 1 opossum, having 3 litters with 13 surviving each time, will produce 39 babies that are ready to breed before the year is out.  Wow!

With so many opossums being born each season, it is surprising that we don’t see many of them around.  They tend to keep out of sight during the day, sleeping in rock crevices, under brush, or in tree hollows.  Unfortunately, the momma, laden down with up to 13 babies on her back, moves more slowly when foraging for food, so is out of hiding for longer periods.  This leads to more fatal encounters with cars, pets, and natural predators.  That’s why we don’t see many of these critters, even though they should be in abundance.  The average lifespan of an opossum is very short, just 1-2 years.  Must be due to dealing with all those kids!

Opossums eat almost anything, which is a tremendous benefit for our ecosystem.  They happily chow down on insects (including cockroaches), snails, slugs, mice, roof rats, fruit, plants, eggs, frogs, birds, snakes, roadkill, and cast-off human food.  Yes, yet another animal that dumpster dives!  And what’s more, even with such a distasteful diet, they have a high immunity to disease and are a very low health risk for humans.  Much lower risk, in fact, than your pets, Bowser and Fluffy!

These critters are very quiet, slow-moving animals.  They don’t tend to be aggressive, but will display certain defence mechanisms in order to get out of dicey situations.  Opossums will hiss and growl, bare their teeth, and as a last resort, play dead.  They do this because they are lousy at defending themselves, so instead they lie down, unmoving, eyes glazed over, with tongues hanging out, for up to 6 hours, with the hope that the predator just moves on!  They even emit a rancid smell that sends all living things packing!

One of the most famous opossums in the world was Heidi.  She grew up in North Carolina, then retired to a zoo in Germany.  She had her own Facebook page with thousands of followers, and even starred on a TV program where she predicted the 2011 Oscar winners – she got 2 out of 3 correct!  Not bad for a 3 year old!  And I have to agree with Heidi – “127 Hours” was a far better movie than “The King’s Speech”.

Opossums are not at risk in Ontario, which is a good thing due to all the positives they provide our world.  But as mentioned earlier in this article, we do seem to getting a lot more of them at Procyon – mostly mommas, still nursing their babies, that have been mauled by pets or hit by cars.  Because the joeys in momma’s pouch need to nurse constantly for over 2 months, it is important for us to keep momma healthy.  So public support is always appreciated.  Please consider sponsoring an opossum on October 18th to celebrate these one-of-a-kind critters.

Gallery of images of momma opossum who had eye surgery. Even while she was recuperating she still took excellent care of her babies. 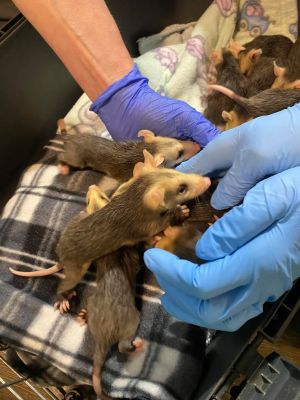 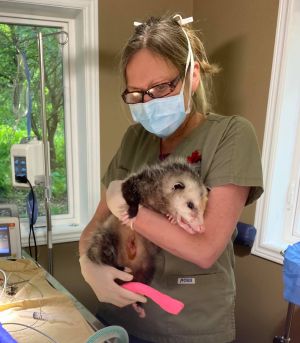 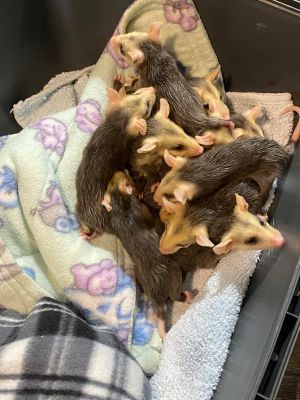 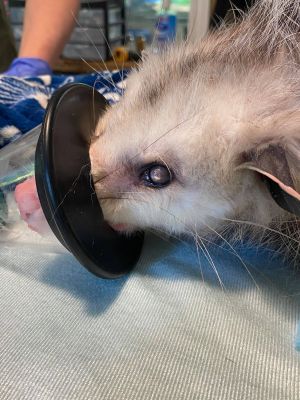