Feature photo of a Porcupette by Jennifer Howard receiving treatment at the Procyon Wildlife Rehabilitation Centre.

On July 2nd we will be celebrating World Porcupine Day! At Procyon Wildlife, we have several porcupines that come into our care every year. And they are a much loved and amusing critter with their interesting assortment of noises. These spiky little fellas are actually quite peaceful and we are never afraid of getting quilled. It is a joy to take care of them.

The following are pictures of Prickles while in our care.

A porcupine grows to the size of a chubby cat and is the second largest rodent in Canada, next to the beaver. It has stubby legs, flat feet with long curved claws, a stumpy tail, and a chunky body that is covered in short, dark brown fur and long white guard hairs that are moulted twice a year. And let’s not forget, those spiky yellowish-white quills! It has a tiny, brown fuzzy face with a flattened snout, small round ears and beady little eyes that don’t see very well. A porcupine’s orange teeth grow throughout its lifetime, so the regular chewing of wood, bones, and antlers is needed to help keep them a manageable size.

The hollow quills are quite fascinating – all 30,000 of them! They are not a porcupine’s first line of defence, though. Its preference is to waddle away to find refuge under brush, in a cave or in a rock pile. It will also try to ward off predators by chattering teeth, giving off a chemical odour, stamping feet, or swishing around its raised tail. The quills range in size depending on where they are – the head having very short ones, about 1cm long, while the ones on its back are 12cm in length. There are no quills on its face, inner legs, or stomach. The black tip of each quill is barbed and these barbs swell when they enter warm, moist flesh, which helps them to move deeper into the predator’s body. Rumour has it that porcupines can shoot their quills, but thankfully this is just a myth. The quills are attached to muscles in the porcupine body and only loosen up when they are ready to use. New quills will grow in the place of old ones within 1-2 months. An interesting fact about these quills is that due to being hollow, they help to keep the porcupine afloat while it forages for vegetation in the water! They also have a fluorescence so that predators can be warned at night!

Porcupines are found all throughout Canada except Newfoundland, PEI, and the Arctic.  They live in trees, often around rocky or bushy areas where they can seek refuge from predators and build a winter nesting area.  A group of porcupines is called a “prickle”, but they are rarely with others except for in a family group.  They are solitary critters that will reluctantly get together only during the winters (they are active all year long) to share a den and food.

Porcupines are nocturnal animals that spend most of their time sleeping in trees and foraging for food.  They are herbivores that have a summer diet of plant leaves, tree nuts, seeds, tubers, fruit, and sometimes the produce from farm fields.  They eat as much as they can through the summer and autumn when food is more readily available.  During the winter they will forage more during the day, consuming mostly tree bark because their regular diet is no longer available.  This is a time when porcupines, especially the younger ones, are in more danger from predators since they spend more time looking for food, often having to struggle through deep snow.

Due to the high-potassium, low-sodium diet of porcupines, they get a hankering for anything containing salt, which they find in the oddest of places.  These prickly critters are known to chew leather and wooden tool handles that contain human sweat.  Anything that was built with plywood is also at risk for being chewed as it contains salty glues and preservatives.  Outhouses are especially at risk – the combination of plywood and the high sodium urine (from a certain gender with poor aim), satisfies this salt craving.  Unfortunately, porkies are also attracted to road salt on highways from the de-icing during winter, and this leads to many vehicular fatalities.

In the autumn, porcupines will come together to mate.  And talk about timing – females are receptive for only 8-12 hours per year, so several days prior to her ovulation time, she begins to let males know she is available.  She does this by marking her territory with vaginal secretions, urine, and by making high-pitched vocalizations.  Many males will respond to her advertisements, and for a few nights there is much fighting, screaming, and loss of quills until one of them wins the right to take the relationship to the next step.

The mating ritual begins in a tree where the winning male attempts to woo his new found love by performing an assortment of fancy dances and spraying urine over her head.  That must be a sight to see!  If the female is sufficiently impressed with the dance moves and the smell of his urine, they move to the ground to continue getting to know one another.  They may rub noses, stand on hind paws to embrace, and make whining and grunting noises after which the female will present her backside to the male, flatten her quills, and curve her tail up over her back.  The male does have to be very careful in this annual performance so that he does not get quilled.  The coital act takes 2-5 minutes, and for about an hour, it is done several times until the female has had enough.  At that point, she moves away from the male and screams at him until he finally gets lost!

In the spring, usually just one baby is born, in a make-do rock or brush pile, after 7 months gestation.  This “porcupette” is surprisingly big – about 30cm long and weighing half a kilogram.  Its body is well covered in fur, eyes are open and teeth are visible.  Once through the birth canal, the soft and pliable quills immediately begin to harden up.  Within days, the young one is climbing trees, and about a week later, is starting to eat solid food, though continues to nurse for several months longer.  Although the mother does take care of her porcupette by feeding it, she does not defend it from predators.  It will be living on its own by the autumn, will begin breeding in its second year, and might live to the ripe old age of 15.

The predators of porcupines include fishers, coyotes, lynx, bobcats, mountain lions, wolves, wolverines, bears, and great horned owls.  The fishers are their greatest enemy.  These predators have learned to attack from the front, quickly flipping the porcupine onto its back in order to get at the stomach where there are no quills.

It is nice to know that porcupines are not at all at risk in Canada.  But they sometimes need our help when they are hurt, sick, or abandoned as infants.  For World Porcupine Day, help celebrate these sweet animals by supporting their rehabilitation at Procyon Wildlife.

Porcupines that have received cared, by the volunteers at the Procyon Wildlife Centre.  Photos are complimentary of Jennifer Howard. 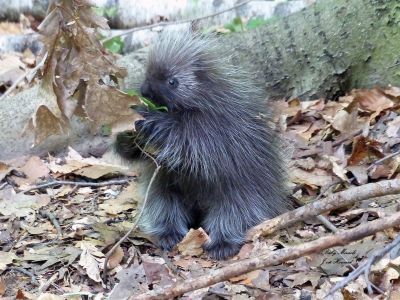 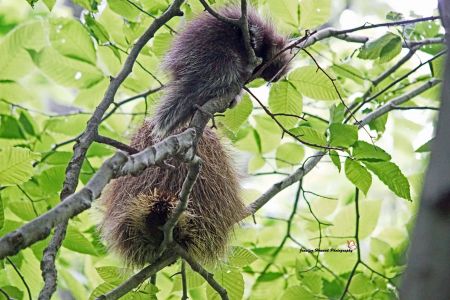 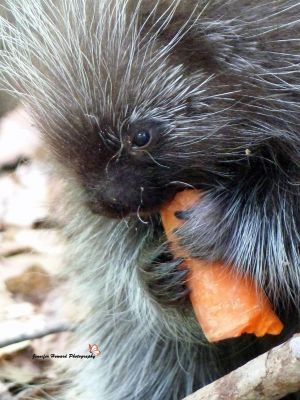 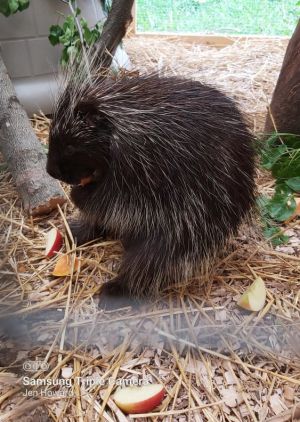 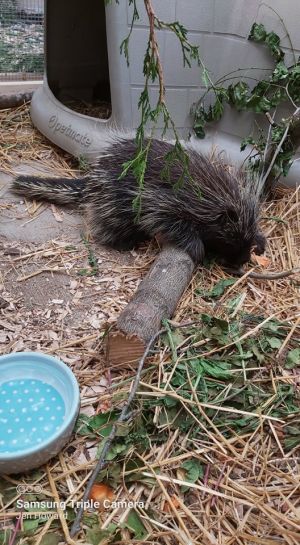