Feature photo of a skunk by Jennifer Howard receiving treatment at the Procyon Wildlife Rehabilitation Centre.

This month we celebrate 2 special dates – National Skunk Day and National Best Friends Day.  And that about sums up what skunks are to us since they provide so much to our welfare and are considered one of the most useful mammals in Canada.  But, unfortunately, this is an animal that alway seems to get bad press!  Its effective defence mechanism of emitting a noxious smell that brings tears to your eyes is known to us all, but let me tell you all the good they do for us!

Skunks are a benefit to anyone who lives near, or owns, land because they feed on all types of pests that farmers and gardeners don’t want on their property.  They eat animals such as mice, rats, beetles, grasshoppers, yellow jackets, cockroaches, snails, moles, spiders, and grubs.  The little stinkers are peaceful critters that prefer to retreat than to attack, their pungent odour only used when they feel threatened.  And rumour has it that some companies actually use their musky scent in high-quality perfumes, diluted, of course! 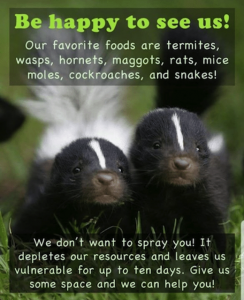 There are 8 species of skunks in North America, though only 2 live in Canada.  The only species we have in Ontario is the striped skunk, and a group of them is called either a “surfeit” or a “stench”!  These animals are about the size of a cat, and most people can easily recognize them by their black and white markings.  However, the white stripes vary quite a bit, with some skunks having lots of white fur from head to tail, while others barely have any white at all.  Usually, there is a very thin stripe of white from nose to forehead, and the back of its head is white with two stripes of white fur extending down each side of its back and into the tail.

Skunks sport chunky bodies with small heads and long fluffy tails.  Their snouts are pointy and their eyes are small.  They have a slow, waddling gait due to having short legs, flat feet, and no urgency to get away from predators due to their amazingly efficient defence mechanism!  Because skunks spend so much time scavenging for food in the ground, they have long, curved claws for digging.  They have quite a varied vocal repertoire which includes hisses, squeals, and screeches to warn away other skunks, while growls, teeth chattering, and snarls are saved for predators, and frightened skunks tend to twitter and coo.

The scientific name for skunks is “Mephitis mephitis”.  Guess what mephitis means in Latin?  You are right – “bad odour”!  This acrid scent comes from glands near the anus which contain enough fluid for 5-6 sprayings.  When getting ready to unload the stench, the skunk will raise its tail and twist its body so that both head and tail are facing the direction it wants to shoot.  And these cute stinkers are remarkably accurate, hitting a target from a distance up to 6 metres away!  If the skunk unloads its full supply during the same encounter, it will be defenceless for about 10 days until it can build up a new supply of spray.  So it uses this strategy sparingly as a last resort, when growling, hissing, and stamping feet isn’t enough of a warning to keep predators away.

So let’s look at the life of skunks.  They live in both rural areas (forests and grasslands) and urban areas (under your porch and in the park).  Even though their natural environment has been taken over by humans, they have adopted the “if you can’t beat ‘em, then join ‘em” attitude, and have adapted very well to the human invasion into their habitat.  They often take over the abandoned dens of other animals, as well as finding refuge under buildings or in cellars.  Their homes will have several entrances, tunnels, and rooms, with the nesting chamber comfortably lined with leaves.

Skunks have a lifespan of about 4 years in the wild.  They are omnivores that are most active from dusk to dawn, foraging for food up to 2 kilometres from their dens.  Their diet depends mostly on what is available in their environment, as well as what is available during that time of year.  Besides chowing down on the pests mentioned earlier, they also enjoy consuming birds, reptiles, turtle eggs, grains, apples, nuts, grapes, and human garbage.

Breeding takes place in the late winter during the only 2-3 days per year that a female is fertile.  After a gestation period of around 2 months, a litter of 2-10 babies, called kits, are born, weighing 15 grams.  Their ears and eyes are closed and they have very little fur, but don’t be fooled – their scent glands come fully loaded!  After 3 weeks of age, the kits’ eyes and ears start to open and they are capable of taking good aim with their fragrance!  The babies are weaned by 2 months, after which they begin to follow Momma out of the nest to find food.  At 6 months old, the young ones are ready to set off on their own, having reached an adult size.  They will find burrows of their own for the winter, and be prepared to start families in the spring.

During the fall, skunks will eat as much as they can in order to fatten up for the winter when it is too cold for them to go out foraging.  They spend most of the winter sleeping, though they do not hibernate.  During milder winter days, they will leave their nests to forage for food, but since those days are few and far between, they will lose up to half their body weight by spring.

Skunks have few predators, the Great Horned Owl being the major adversary due to its very poor sense of smell!  The highest mortality of this species is due to disease and vehicles (cars and farm machinery).  Humans do trap skunks for their fur, but not enough animals are killed to make an impact on the skunk population.

At Procyon Wildlife, we rehabilitate lots of skunks.  Last year we had a record number of the little rascals, and they turned out to be a favourite animal of many staff!  They are not at all aggressive and workers soon learn that when moving a skunk to either feed or clean it, it is important to pick it up quickly and tuck in the tail!  A raised tail is a warning of what it is come! 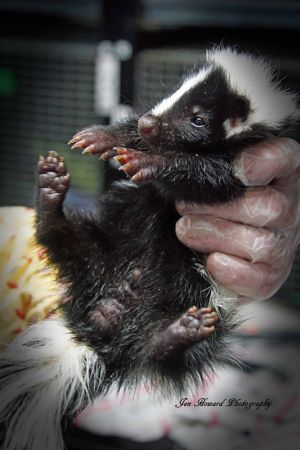 The above photos by Jennifer Howard are of a Striped skunk rehabilitation at Procyon wildlife Centre.

What to do if you, or your curious dog, get skunked?  Not tomato juice.  Sorry Heinz.  There is nothing that will get rid of the smell completely, except time.  There are some commercially manufactured products and a few home remedies that might seem to lessen the smell, though many of these just mask it.

In the meantime, let’s all appreciate the mighty skunk for all that it does to make our world a better place.  On June 14th, celebrate these critters by sponsoring one of them in treatment at Procyon.  And wear black and white in solidarity!