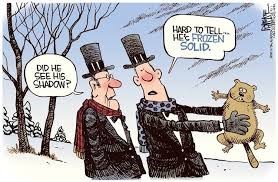 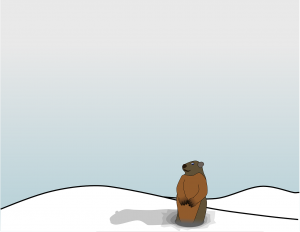 It just wouldn’t be February if we didn’t celebrate Groundhog Day this month!  Keep your ears open on February 2nd to hear if Wiarton Willie sees his shadow!  Will we have 6 more weeks of winter?  Locals say that Wiarton Willie is accurate about his weather predictions 90% of the time.  Climatologist David Phillips begs to differ, saying Willie is only right 37% of the time, which isn’t too bad considering meteorologists, with their 4 year university science degrees, are only accurate 50% of the time in predicting long range forecasts!

There are many names for a groundhog – thickwood badger, ground pig, land beaver, whistle pig, and Canada marmot to name a few.  One of the more familiar names they go by is “woodchuck”.  However, these animals have nothing to do with wood and they certainly don’t chuck it.  The name actually comes from the native word “wuchak” meaning “digger”.  And diggers, they are!

These chubby little rodents are only found in North America.  They are diurnal, which means they come out of their burrows during the day to feed, usually in the early morning.  During the winter months, groundhogs hibernate for 3-4 months.  Their heartbeats go from 80 beats per minute down to 5 beats during hibernation.

A male groundhog goes a-courting in the early spring.  He will search out the burrows of hibernating females in order to find mates.  Yes, that’s plural.  A male usually has 2 families within his hunting range.  He maintains his own burrow, as do his mates.  After babies are born, the male will regularly visit with the families until the offspring are ready to strike out on their own.

Mother groundhogs have one litter a year of 2-6 babies, which are born without hair and unable to see.  By a month old, their eyes are open, they have grown some hair, and they have begun to eat solid foods.  By 2 months, they are venturing outside of the burrow.  The offspring stay with their mother for about 3 months before leaving home, although sometimes the female young will stay with their mother for longer, up to a full year.  They each dig their own burrow in which to live since mature groundhogs do not live together.  They tend to be territorial and aggressive amongst their own species, though they do look out for the others in their vicinity.  Groundhogs are solitary animals and tend to live 3-6 years in the wild.

Adult groundhogs are 1-1½ feet long with very short legs, and they weigh about 13 lbs.  Quite the chonk!  They run quite slowly, only about 8mph, more like a slow waddle.  Groundhogs have coarse, greyish-brown fur, small ears, and a bushy tail.  They have 22 teeth with the 4 front ones growing constantly.  They are part of the squirrel family, so if you can imagine a giant squirrel – that’s a groundhog!

Groundhogs have very sharp, curved claws used for digging burrows.  These burrows are usually quite extensive being up to 6 feet deep and 20 feet wide, with several levels and many rooms including a bathroom!  For safety, there are also many entrances/exits and even a peephole to assess danger.  In building a burrow, up to 700 lbs of soil can be excavated.

Like rabbits, groundhogs like to build their burrows at the edge of woodland areas.  Their preference is to have one burrow in an open area in the summer for better access to food, and a forested burrow through the winter while they hibernate.  Sort of like having a city home for work and a cottage in the hinterland to relax!  Groundhogs keep their homes clean by changing out their nesting materials on a regular basis.

When not hibernating, groundhogs eat.  They are herbivores with a diet of plants, grasses, tree bark, and fruit.  Oh yes, and everything in your vegetable garden!  After consuming about a pound of food at one time, groundhogs like to bask in the sun as the food digests.  Sounds like me after a good meal!  But they also have to be on guard for predators.

Groundhogs have lots of predators, all of which are faster than they are.  These include the coyote, badger, red fox, bobcat, cougar, eagle and owl.  A groundhog will keep a watch out by standing on its hind legs, and if it senses danger, it will raise the alarm, letting out a whistling sound to warn others (hence the name “whistle-pig”).  Because the groundhog doesn’t move at a quick enough pace to outrun its predators, it needs quick access to a burrow entrance so it can safely get away at a moment’s notice.  It is also capable of climbing trees and swimming in order to get away from predators. 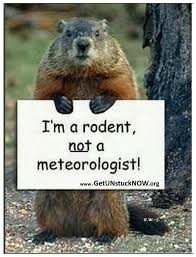 Over the years, human activity has increased food access for groundhogs, so this species has thrived.  That’s a good thing because there several ways that groundhogs benefit our communities.  Due to their amazing digging skills, they help to aerate soil, which increases the ability of other plants and trees to grow.  Their digging has also unearthed valuable artifacts that have revealed important archaeology sites in North America.

Other benefits are that these chunky little critters act as a food source for many predators, including humans living in more rural areas who use them for food and fur; they are used in medical research; and their abandoned burrows play host to other species such as skunks, raccoons, snakes, and red fox which eat mice, grasshoppers and other insects that are a bane to farmers.  Oh, and did I mention their meteorological skills?

ve you with the following question:

How much wood would a woodchuck chuck

If a woodchuck could chuck wood?

Well, I already mentioned that woodchucks don’t chuck wood.  But, according to a Cornell University wildlife biologist, if a woodchuck could chuck wood, it would probably be about 700 lbs, which is the same amount of soil a woodchuck unearths when making its burrow.

Woodchucks neither would nor should chuck wood

Good luck to the woodchuck who is misunderstood