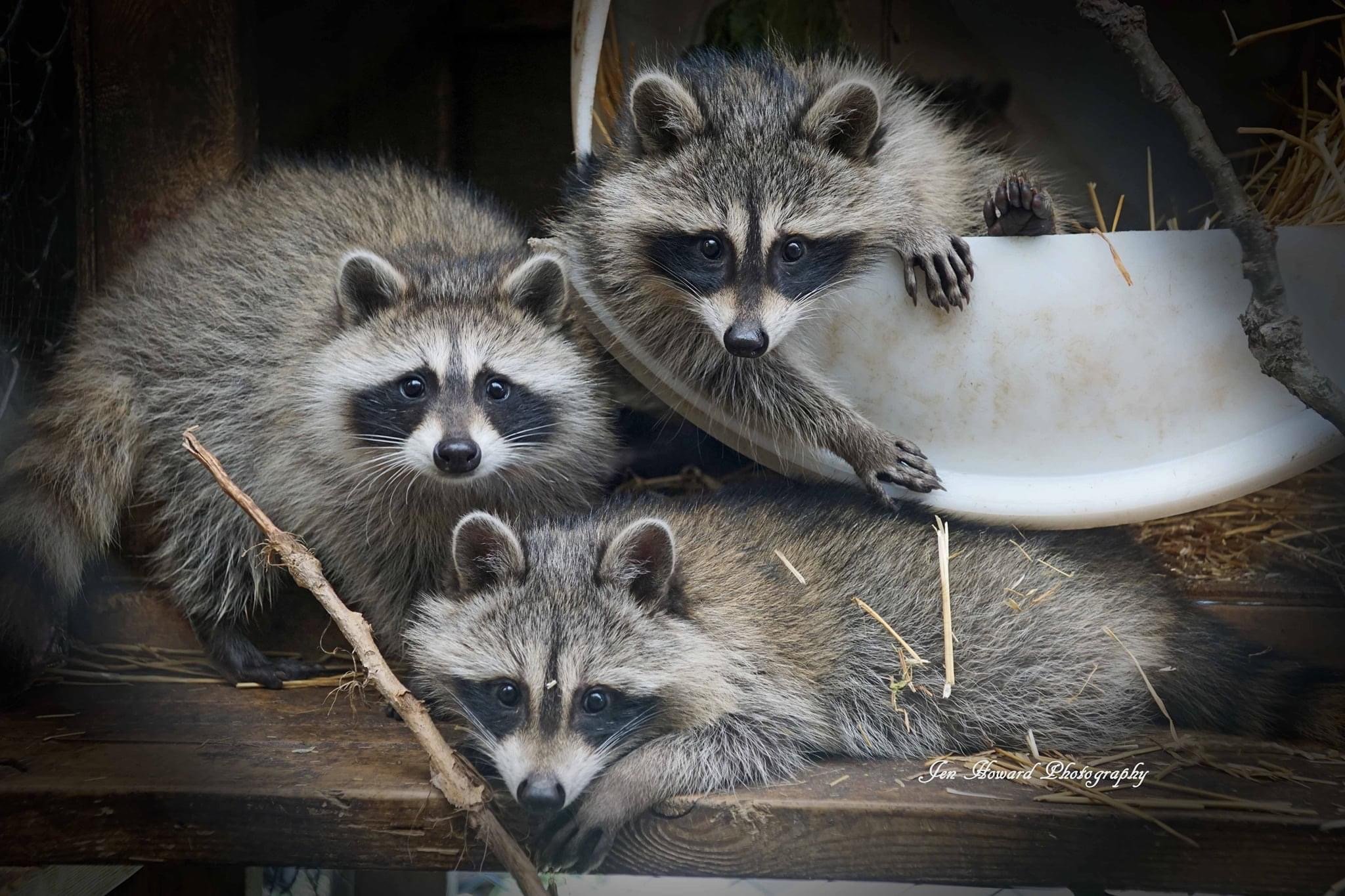 Raccoons are my spirit animal.  When they are orphaned as newborns, usually due to human interference, they don’t look much like raccoons.  Eyes are shut, snouts are round, and they have very little fur that distinguishes them as raccoons (no masks and striped tails).  About the only thing they can do is nurse from a bottle if it is held right up to their mouths.  Some babies can’t even do that.

In the wild, they spend their first year being cared for by their mothers.  Without the nurturing and guidance given by a mother, they would perish.  That’s where concerned community members come in – they bring these orphans to Procyon Rehabilitation to be cared for.

Some volunteers are qualified to foster these babies.  Because I enjoy working with the little critters so much, I fostered 2 of them.  Sadly, one died.  Then I was given 2 others.  Oh my!  What a load of time-consuming work that was since they were on different feeding schedules!  There were feedings all throughout the day, starting at 7am right up until midnight!  Each feeding and cleaning took me about 2 hours.  After 3 weeks, I managed to get them stabilized and growing well, so returned them to Procyon for the volunteers there to continue their care.

My infant raccoons, Maisy, Trefor and Tabitha, grew into healthy youngsters, and were ready for stage 2 at Procyon.  They were relocated to the Toddler room where they were given a larger cage with tree trunks, branches and toys. It is now time for them to start weaning from formula to solid food, and less interaction from people. It is important that they have a healthy apprehension around humans, so at this stage, we make sure we aren’t friendly with these critters.  That’s probably the hardest part of our job.

At about 4 months of age, the toddler raccoons are ready for Stage 3.  They are given the first doses of vaccinations that will help them to remain healthy once released and moved outside to the large enclosures.  It is here where they have more of an opportunity to climb and rough-house with their mates.  This is a very important part of their rehabilitation.

It is at this point where we have to make sure that the raccoons will be ready for release, back into the wild.  We try to make their time in the outdoor enclosures as close to what they will experience after release.  (No, we don’t give them garbage bins to learn to break into, though that is a good idea!)  They are given tree trunks to climb, branches to chew or hide behind, straw on the ground, and a variety of food that is scattered throughout the enclosures to help the raccoons learn to forage for their food.

We also provide enrichment for the raccoons.  What is that, you ask?  It’s whatever activities would be safe for the raccoons that help to pique their curiosity and get them to use their paws to fend for themselves.  They are very good at manipulating their paws, even though they do not have opposable thumbs.  We put “toys” in their enclosures that require them to open the items by flipping, twisting, shaking, or unzipping in order to get a treat.  Sometimes, the toys are purely for entertainment, not much different than what you might put in a playpen to amuse a human baby.

In the height of summer when it is really hot, we put pools in the enclosures.  The raccoons love to play with the stream of water as the pools are being filled.  Then we put small fish and berries into the pools so the raccoons can learn to catch food from streams or lakes when they are in the wild.  Raccoons do love to dunk things in water.  They aren’t washing their food.  It is thought that their paws get more sensitive when wet and it helps them to distinguish what they are touching.

When our raccoons are at least 5 months old, they are ready to be considered for release.  We take them back to where they were originally found.  Adult raccoons that were brought to us due to injury, already have dens in their home areas.  They are also aware of where to find both the food and water sources needed for survival.  So we release them within a kilometre of where they had been picked up.  Raccoons that were brought to Procyon as infants, can be released up to 15 kilometres from where they were found.   This is because they don’t already have their own dens.

It is with mixed emotions that we release our furry masked bandits.  We have completed our mandate to rehabilitate and release, the raccoons are in the wild where they should be, but we will miss them.  They all have very set personalities, just like people.  Some are very active and inquisitive, some are laid back couch potatoes, and they are all very interesting to get to know.

I would love to know how Maisy, Trefor and Tabitha are getting along in the wild.  Sure hope they successfully found homes and friends for themselves.