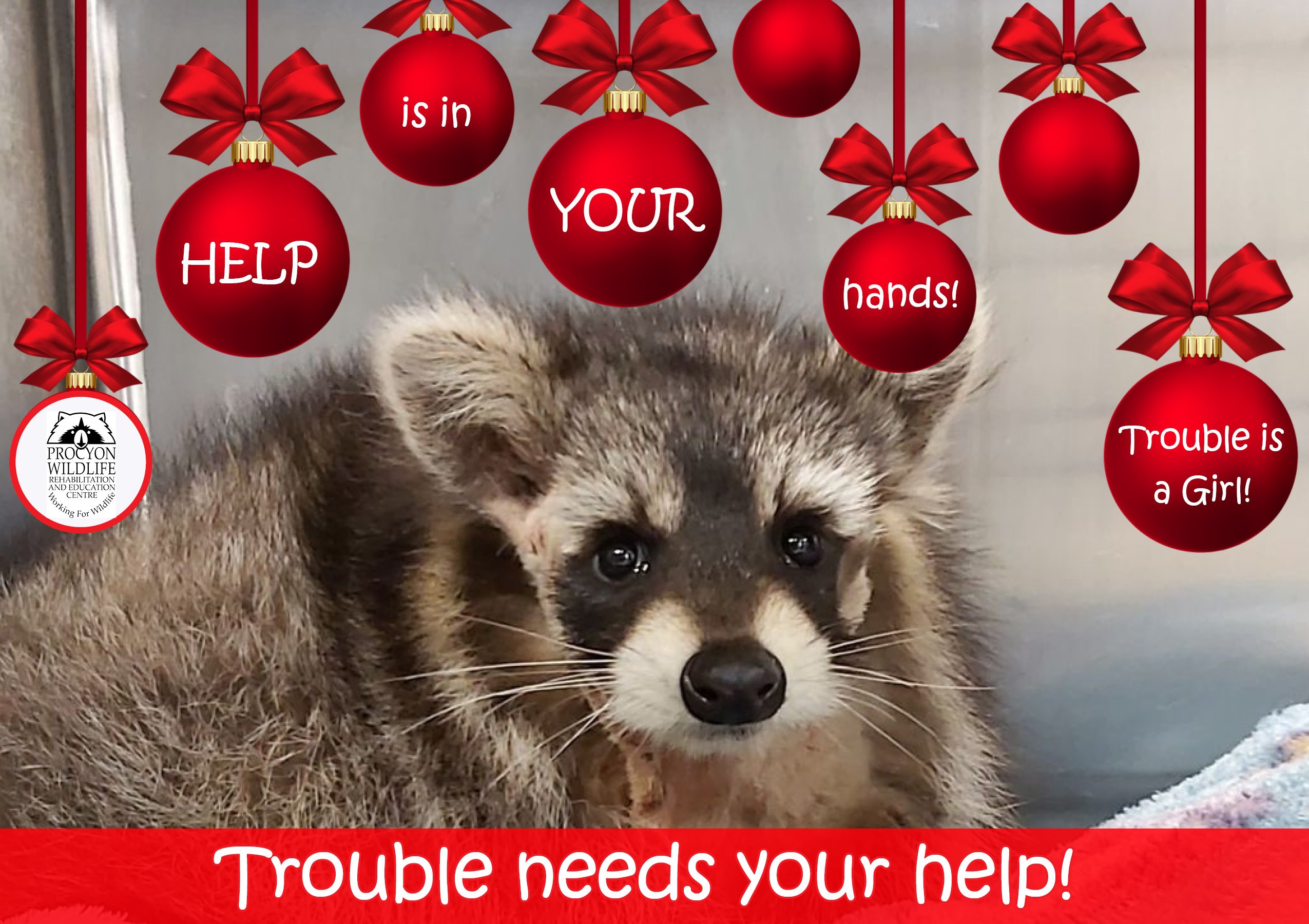 Procyon Wildlife has had quite a year; 2020, the year of COVID-19, resulted in a loss of regular fundraisers. Fortunately, we were able to continue running the centre under strict protocols even though there were even more orphans, sick and injured wildlife being admitted. 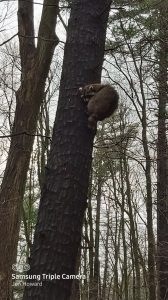 We have a special little one that came in on Thursday, November 26th.

A woman walking her dogs discovered this young raccoon. She sensed it was in trouble and wisely took her dogs back to her car and called us right away. She went back to the forest trail. As it approached her, she noticed the little one had blood around and behind its ears and under its neck.

We were only maybe 10 minutes away or so, when we responded to the call, but when we arrived this poor raccoon had already been chased up a tree by off-leash dogs. Our volunteers are not really set up to do rescues, however, we did our best to try and lure the little one down. It was clearly very hungry as well as injured.

We had almost lured the frighted animal down, when more off-leash dogs showed up. Although we explained the situation to the owners, we got nowhere as they continued to allow their dogs to run; one dog going right over to the tree, its hackles raised and barking, which forced the scared little thing even higher. Because the raccoon had approached this lady earlier, the possibility of distemper could not be ignored; it was essential that it would not be in contact with the dogs running loose.

Every dog was off leash, some people not even having a leash with them; there were dogs running about, not even near the owners. Many people do not realise that letting their dogs run off-leash is a threat to wildlife as well as a threat to their dogs. A small dog is no match for a big raccoon if it meets one and things go wrong. Neither is a raccoon a match for a big dog or two, who are off-leash. Provincial and National Parks (this was a provincial park) have laws in place which require all dogs to be walked on leash and that owners pick up after them; this was not happening either as we stepped around many piles. Please, these laws are put into place to protect not only our wildlife but also your dogs, and you.

We were told illegal snares had been found in the area as well. Why would anyone even risk having their dog caught in a snare? Also never feed wildlife along these walking trails where dogs are on the run. It is a dangerous situation for all.

Since the raccoon was now just too high for the catchpole, and it was getting late in the day, a live trap was brought in and set up behind the nearby trees. The raccoon watched every move from its perfect perch. It was a safe place. Before we left, some nice smelly food was set in the trap and it was covered and camouflaged.

As we left, we could see the raccoon was extremely uncomfortable and hoped it would find the trap. We expected that the raccoon would remain up there until dark since people and their dogs were continuing to walk the trail. 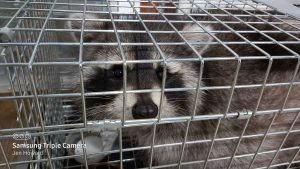 At dark, we went back and met the finder who was quite concerned. Walking up to the trap we noticed it was closed. We had successfully captured the raccoon. It had had a good feast and was protected in the trap. We got it back to the Centre and made it comfortable. It was still so hungry and went right to its food.  It was checked over, and Dr. Rebecca, the vet, would come in the morning to see it. We administered some medication to help with pain and infection. Lights out, safe and sound.

This little one was named Trouble by the finder since this raccoon was so much trouble to get.

Dr. Rebecca came the next day. The raccoon, who turned out to be a young female, was sedated for her check-up. She ended up with a shaved head and neck and was given medication for fleas as she was infested, since she had been unable to groom herself properly. She had some nasty dead, infected skin cut way from her neck; her sweet little face that earlier was peeking around the tree looking for help from a human, now almost bald. Her wounds were obvious, her pain and discomfort very real. 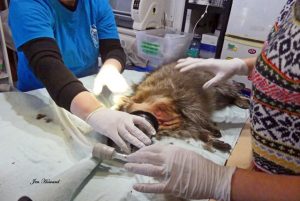 Trouble will need regular vet checks to make sure she is healing well. She is an escape artist for sure waiting by the inside of the door to come out for a walkabout every time it opens, hence making it rather difficult to feed and clean her without a chase. Trouble is Trouble. But she is a super big, sweet raccoon. This year’s baby. Only months old.

Trouble has now lost her freedom for a few months because people are not obeying the laws. The consensus is she was attacked by a dog. With puncture wounds all over her head on both sides, near her eyes, her ears and the big very nasty one in her throat. Trouble is incredibly lucky to be alive. A sweet innocent little girl minding her own business walking in the forest, her home, which she shares with us. A beautiful forest, which is invaded by humans every waking hour.

Yet she sought out a human to help her, her last resort. She was in pain, she was confused and scared, and she was very hungry, and the wound on her neck was very smelly with infection. She approached this lady who wanted to help her while others paid no mind to her painful injuries and pleas for help.  It is not normal for a raccoon to approach you. It could be sick or in this case injured. Or, people have fed it, putting it at risk. 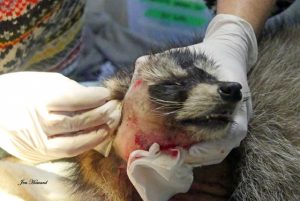 Please and I cannot stress this enough, walk dogs on leash. It is the law, and it is for the safety of all living things. Trouble will be overwintering with Procyon Wildlife now as she heals and will need regular care. This care will include wound management, sedation for vet checks for wounds to be surgically debrided and checked. She will also require twice a day wound treatments, pain meds and antibiotics for the first 10 days of her stay with us. She will need food, fruit and vegetables, straw, and housing once she can go outside with heated water bowls. She will be in our care at the Centre until at least April before she will be ready to be released, provided her healing process and rehabilitation goes well.

Trouble is one of 26 raccoons in our care right now. She is going to get the best of care. The estimated cost to care for Trouble could be approximately $2,000.00 or more.

Donations to support us in caring for her would be greatly appreciated during these strange COVID-19 times. Every little bit helps. Let us help little Trouble get back on her feet so she can be free again. This beautiful little girl needs your help.

Help is in your hands

View this gallery of photos featuring our sweet little Trouble:

Procyon is a not-for-profit wildlife rehabilitation centre depending on donations to keep it going to care for orphaned, sick, and injured wildlife.

HELP is in YOUR hands!