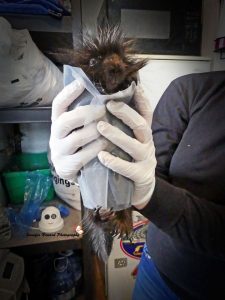 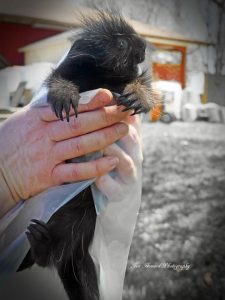 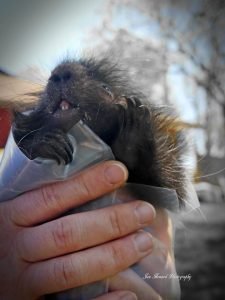 Back in the spring, one at a time, these two tiny baby porcupettes arrived at Procyon Wildlife. The first one arrived an orphan; tiny, dehydrated and in need of help. Our animal care manager, Crystal, took it under her wing. It was touch and go for a while, however, Crystal’s round-the-clock care pulled that precious baby through.

Then another wee porcupette came in, orphaned as well and in a very delicate state. Crystal also took that one under her wing. They both received around the clock care from her, they were pulled through tough times more than once by Crystal. It became an important project to save their lives.

These precious porcupine babies were in good hands but were so small, that they were in extremely critical condition for some time. But then they started to improve; more alert and active and eating well. They were kept in separate cages as one was quite a bit bigger than the other. And the smaller one who was very vocal wanted nothing to do with it. 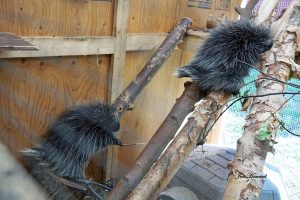 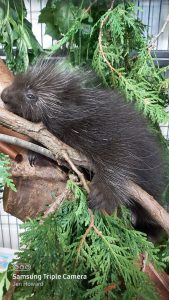 As they progressed, they got some outside playtime. Although the smaller one was now catching up, she still wanted nothing to do with the other one. She would tolerate him for a little bit but if he got to close or heaven forbid, “touched” her, all heck would break loose. And she would voice her opinion in an exceptionally loud way. Crystal would then come to the rescue. Again.  It was entertaining and very, very sweet or so we thought. Then the day came when the bigger one went to an outside enclosure. He loved it. There were places to hide, branches to eat and stumps to climb. He was just loving every minute out there. It was still a bit before the little one grew enough to be put outside. She was quite happy where she was.

Then finally it was time. She was ready to go outside too. And she was put in with the other one. Well, he was thrilled but she was not so much. She made her porcupine noises to voice her opinion on the whole situation. It was so cute. To us. We kept an eye on them but as days went on, she tolerated him more and he left her alone more than not. But still bothering her sometimes and whenever he did the whole world knew it.

Finally, the time came that they were both ready to go home. Crystal was asked if they would go free together. The answer was no. They were from different locations, and porcupines are solitary animals. They needed to and deserved to go to where their mothers had them, where their homes are located. That is the MNRF’s protocol as well. They will take over the territory where their mothers left off. 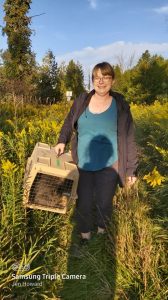 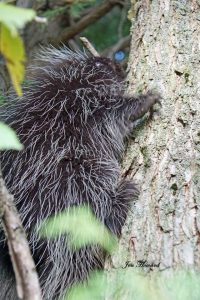 September 22nd was the release of the bigger one in the area he came from. As always, the area is carefully and closely scoped out to find that perfect spot and again, when we get there. He did some tap dancing in his crate the whole way there. He was very anxious. No vocalizing though, just a lot of feet sounds. Almost like a little drummer back there. That was this little one’s way of saying, “let me out!” As always, we take some food for them to hold them over until they get their bearings. Carrying this one in until we found a good spot with food and water was not too bad. He just chilled out hanging on and taking it all in. We walked him into the forest and opened the crate. He walked out. Sniffed around and started to turn and go back into the crate. So that was closed and moved. With that, the little dude who didn’t look so little anymore turned away from us and started exploring. He explored everything, branches, leaves, you name it. Occasionally, he would turn and look at us for a minute. Then off he went again. Finally, the perfect moment. He climbed a tree. Higher and higher with great confidence. That was the moment we knew this one would be okay.

September 24th, the second little one went free. She on the other hand was very vocal. We did not get the dancing with this one but got chewing on the bars and singing. Both porcupettes were very different, individual little beings and just adorable in their own way. 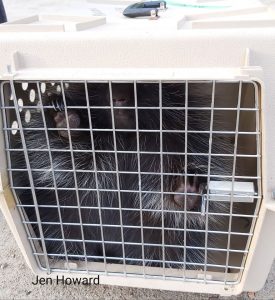 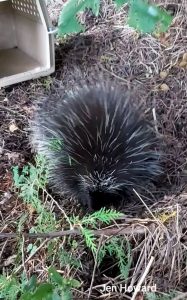 It started raining on the way up and that was not going to work well in our favour, however, we kept going in hopes it would stop. Amazingly when we arrived at our destination the skies cleared. So again, we scoped out the new area. We walked in over a km to get to a safe place with food and water. She was quiet, enjoying the ride, face and feet up on the door checking it all out. But this little one did not want to go. She came out of the crate fine but kept coming to us. Unlike the first one, this one ate some of her much-loved rodent blocks. Then explored a bit, found us again, ate some more. Repeat again. This was not good. She did however then start to get sidetracked often with leaves and branches that she had to stop and sniff or taste. This was good. Each time she got better but time was moving along, and the sun was setting and it was time for us to get back to the car.  This one took much longer before we felt confident to leave her. Finally, with a little help from a noisy bag, she went away from us, then climbed a tree. This time she did not look back. She found a nice big branch to hunker in on.

On our way back peace was settling in on this beautiful forest/wetland area. A big great blue heron took off and flew over in front of us aways ahead and by then, the sun was almost down. Fall colours were showing their faces all around us, displaying mother nature’s beauty. The odd bird or two were chirping and settling in for their nights’ sleep while others were coming to life.

We wish our porcupine well. To be safe and to live a long prosperous life in this gorgeous area in which she was born. She deserves to be home, free and wild.

We wish them both well. 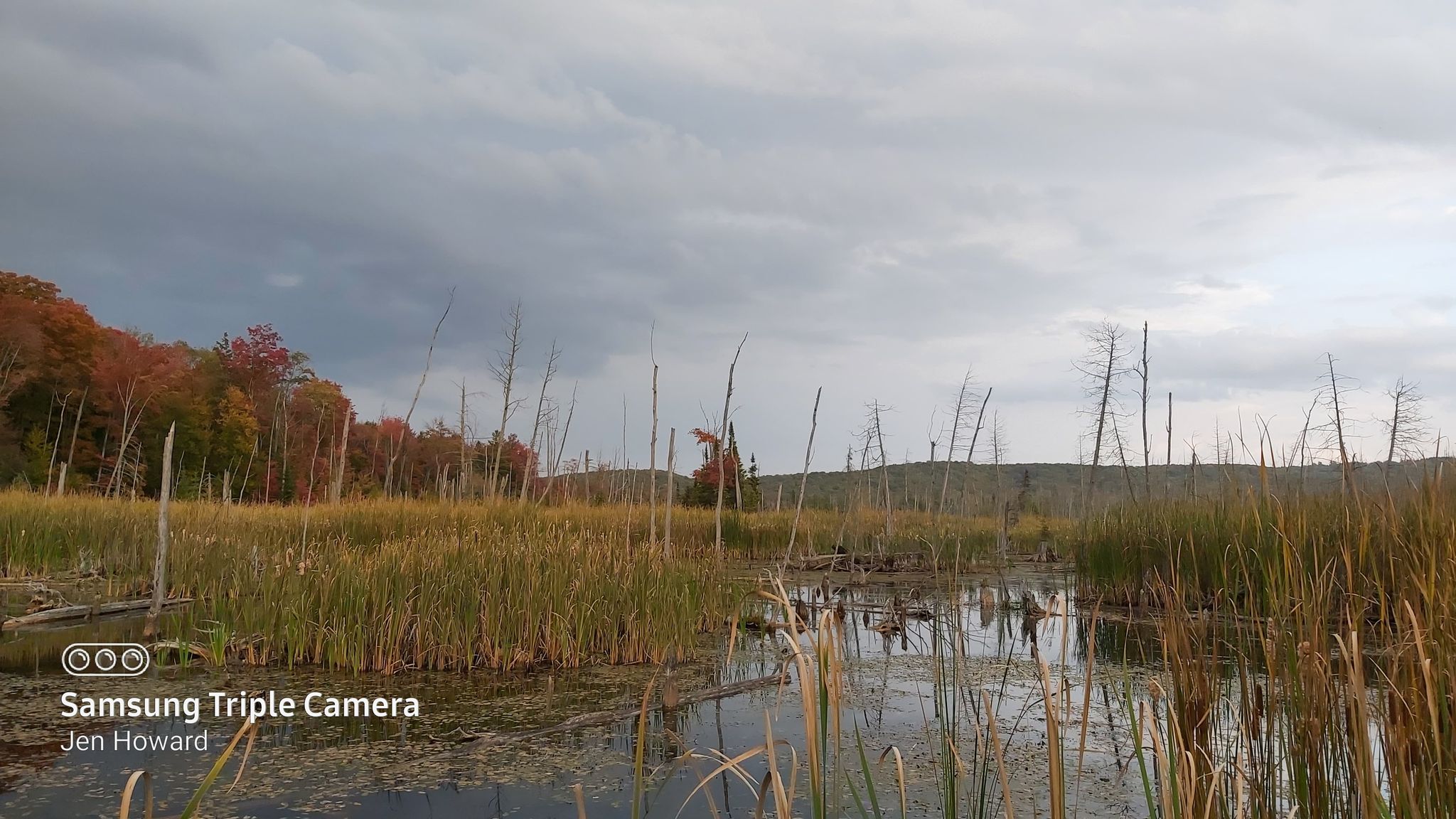