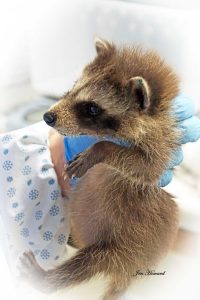 Spring is orphaned babies galore. More and more arrive daily. Crying hungry little beings who have lost their mothers or their mothers have been relocated leaving them behind. Making their way to us at Procyon; a wildlife rehabilitation facility.

Volunteers work nonstop from morning till night feeding, cleaning cages, making formula then starting all over again, from 5 am till 11 pm, sometimes later. Some of the tiny wee babies who are in critical condition get fostered out for round the clock care.

Then the next stage, they grow and go outside to bigger enclosures to learn to become wild, they play and get lots of enrichment, learn to catch minnows in their pools and scrounge for worms and mealworms, and grow some more.

Then fall comes. Colder weather, heavy fur coats coming in, they are beefing up, with most of them getting very restless. They want out. Our job is done. 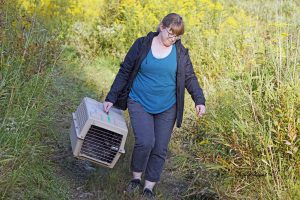 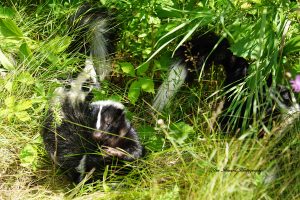 Fall is when releases start happening with our spring babies, these once tiny babies are now going to run free. Some run like the wind and never look back, and some just take their time. Checking things out, every little blade of grass and every tiny flower. They sniff the air and they look around and miss nothing. Then some run away and stop, turn around, look at us and say thank you then disappear into the wilderness. We smile ear to ear and say our goodbyes. And then we wish them well.

Following MNRF’s protocols, the animals always get released near where they were found.  It’s a job and a half getting them all back out there because we lose so many volunteers due back to school, etc. But it puts smiles on our faces. Because for us, all that hard work and all those long hours are rewarding. Sometimes heartaches instead of smiles, because they don’t all make it. Well, it just makes it all worthwhile to see them out in the wild where they belong. 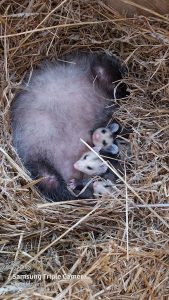 You always wonder how they will fare since you know they won’t all survive. In the real world, they don’t all make it through to their first year. It’s just mother nature’s way. Their mothers feed them and teach them how to survive; we try our very best to do that but nothing can replace their mothers. They have so many obstacles to overcome, at best, it is survival of the fittest out there for them all. Nature can be cruel. But one must die for one to survive in the wild.

However, when they end up with us because of human conflict, then we need to help them. It is our obligation to do so. So many people, so many roads and not enough habitat is a huge problem for wildlife. Dogs running off-leash. People with fast boats in areas they shouldn’t be. Destroying habitat and nests, and life. We want to have fun but we must remember that we are sharing our space with our wild friends. Or should I say they are sharing their space with us? We as humans need to learn to coexist with our wildlife, to respect them and to protect them and the habitat that surrounds us all. It’s also our habitat. 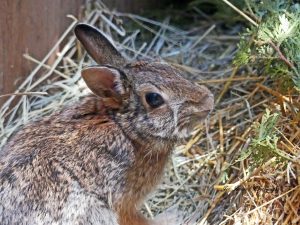 Now that fall has arrived and our wildlife patients are being released. Do we get a break? Well somewhat, some days. But now the injuries start coming in and the sick. And some days we don’t get a minute to even catch our breath yet again. And this year even more babies are coming in, not just little cottontail rabbit babes but young squirrels and also raccoons still being bottle-fed.

It’s also the time that any jobs we have to do, get done such as building maintenance, building more enclosures, etc. 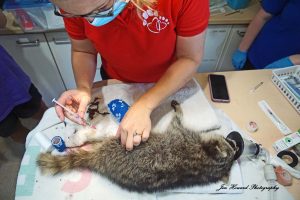 Injuries are hard to deal with on a wild animal. They are scared and in pain and don’t understand. We have a raccoon with a broken leg. She does not want to be handled, is angry and her cast has to stay on for weeks. However, on her last vet check, the decision was made to try to keep her quiet and on pain meds because she just will not keep her cast on, causing her more stress to keep being caught, sedated and recast. She will overwinter with us.

Distemper has taken many animals from us. Mostly raccoons but also a beautiful skunk came in and her condition turned out to be distemper. It’s so very sad to see them like this. And they get worse as time goes on and you can’t help them. So if you see an animal who is sick, disorientated, wandering aimlessly, going into seizures, walking in circles, very friendly, uncoordinated, drooling etc., it probably is distemper and your best thing to do is call Procyon and leave a message. Always leave a message, we will get back to you. Do not go near the animal and do not let your pets or kids go near it. I recently helped an animal who had distemper. No one in the town would help it. By the time I was able to get there a family and their children had fed it in their backyard, it was very friendly, they had given it food and water, then it left there and walked in circles on another front lawn. It was having seizures. Just before I got there it wandered onto the road and was hit by a car. So now, on top of everything else, it was now injured and laying on the side of the road having serious seizures.

And then no one would help this poor animal to humanely put it out of its misery on that long weekend. No one. My last call of many found a vet who told us to bring it in first thing in the morning as she was away. Or she would have done it. It didn’t make it till morning. An animal in need is an animal in need no matter what it is and that should never have happened. We need to, as caring communities, work on getting this changed. We need wildlife protocols put in place with our townships.
Education needs to be done as well so that people know what to do, what is safe and what is not. Making that call to us at Procyon 905-729-0033 is the most important thing you can do, leave that message because the phone volunteers at Procyon do check them every hour. They will get back to you. Be patient. Together we can make a difference to an animal in need. 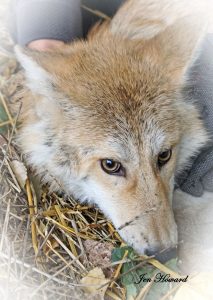 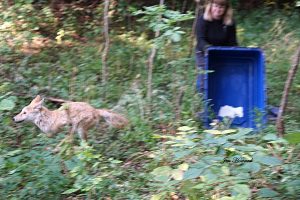 Before I go, I would like to fill you in on two of our most recent releases of which I was a part. A young coyote who came in with what was thought to be a foot injury. Turned out to be either a birth deformity or an older healed injury. He was vet checked thoroughly and given the okay to be released. He was with us for 5 days in total. His release was wonderful. We walked him through tall brush and wildflowers following a wildlife trail, then through the forest, carrying him as far as we could go and picked the spot. He wasn’t fully hiding anymore in his crate. He looked a lot more at ease. But no way he was interested in leaving it either.

So Crystal took off the top and opened the crate wide. Our young coyote still was hunkered in, so a bit of a tip-up of the crate and as soon as he got his feet on the ground he wasted no time in getting out of there into the wild. He was free. He all but disappeared in the tall grasses. We thought he was gone. Then there was a rustling and out he popped, turned around, looked back at us in a small opening, his eyes met our eyes briefly as if to say “ thank you”, and then he was gone. Our long trek was worth the effort. We stood for a bit and gathered our thoughts and watched and listened. But this young coyote was home.

Then another special visitor arrived. Found in someone’s pool. Captured in a net and brought to Procyon rather wet and cold. A beautiful little silver-haired bat. The first one we have ever had at the centre, I believe. So beautiful with its silver-haired back. Fluffy thick fur. Tiny little head and amazing face. Yes, I’m talking about a bat. But here at Procyon, we love our bats. 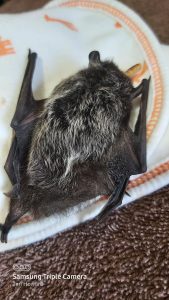 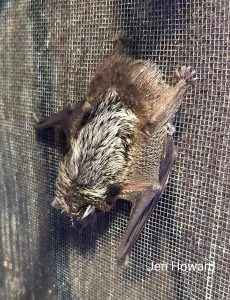 It was watched carefully for a few days and was fine, had a healthy appetite and was very feisty and wanted nothing to do with us. It was time for it to go free as well. He had a nice big juicy mealworm in the afternoon which he thoroughly enjoyed. After our shift was done we got him in a carrier and covered him. Off we went. Although he was also ready to go he didn’t want to leave. We walked him to where he had lots of trees to choose to roost in until dark which was only a couple of hours away. Then finally his wings opened, he caught the breeze and played with it for a few minutes, his wings lifting and then the moment of truth. He flew. Off he went straight to the trees and gracefully landed. He then crawled up to a safe concealed place and he turned around and faced downward. Then he settled in till darkness fell upon us. He was free.

More smiles to end the day. Two more animals back in the wild. Life is good. We wish them well.

Remember.
Help is in your hands.

Fall in a Wildlife Rehabilitation Centre