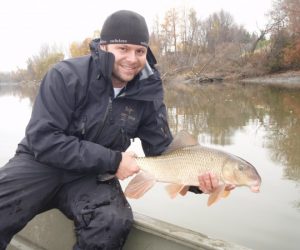 I woke up this morning and hit the water on Big Rideau to catch some smallmouth bass.  I was with my three kiddos and they wanted to fish near the island without any leaves on the trees that was covered in birds.  They were referring to “The Owls” – a series of small islands surrounded by deeper water with one island that has been commandeered by the cormorants.  We have fished in many places on Big Rideau but never around The Owls.  We pulled up and started catching bass after bass from juveniles to near trophy-sized fish.  We landed thirty smallmouth in less than two hours (literally at the base of the cormorant colony).  During the fish catching, my kids loved watching the cormorants fly en masse and this led to some rich conversations about the role of birds in structuring aquatic systems.

Cormorants are not the only fish eating birds that like to forage on Big Rideau.  Loons, osprey, merganser and kingfisher all rely on fish as their primary food source.  A study in Ontario revealed that two parental loons with two chicks would consume over 950 kg of food (mostly fish) during the 5.5 month breeding and rearing period.  There are no proposals to cull those species so what is different about cormorants?  Cormorants live in colonies so they may be more conspicuous than the other species.  They also tend to eliminate vegetation from where they reside owing to the chemistry of their feces.  It is worth noting that they tend to reside on islands that are tiny and tend to be void of human infrastructure aside from perhaps a navigation marker.  They don’t may haunting calls like loons, look nearly as appointed as mergansers, or soar in the same way as osprey.  In fact, they smell and as birds go, are pretty drab.  In other words, they suffer from an image problem.  I wonder if cormorants had more impressive colouration if we would ever have this conversation.  As a fish biologist I remain perplexed by the vitriol towards these animals.  The more we learn about bird-fish interactions the more we realize that birds play important roles in structuring fish communities.  Did you know that fish-eating birds tend to forage on fish that are sick and immunocompromised?  Did you know that fish eating birds keep help to balance fish populations?  Do you know that most efforts to control predators fail and are done to try and appease vocal advocates for culling? 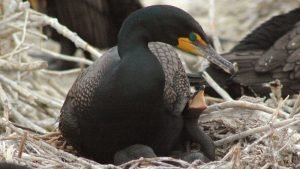 If the Ministry of Natural Resources and Forestry (or more likely their political handlers) think that cormorants are villains and responsible for fish population declines and biodiversity loss, then we might as well go all in and start shooting osprey and loons.  Or… Maybe we should look at our own actions.  The reason we like to blame cormorants is because it is easy.  The BIRDS are responsible for the state of our fisheries.  The BIRDS are responsible for degraded aquatic ecosystems.  The reality is that WE are the drivers of aquatic ecosystem health.  From invasive species like zebra mussels and round goby to water pollution arising from agriculture and urbanization to overharvest, humans are both the CAUSE of our current environmental woes and also the SOLUTION.  Killing birds that eat fish is a lame attempt to temporarily divert attention to the tough work we all need to do… reducing OUR impact on the environment and allowing nature to rebuild and rebalance. 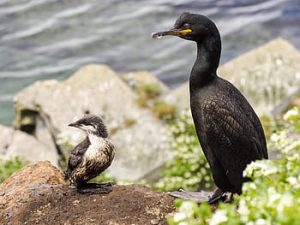 I am a strong advocate for evidence to guide environmental decisions.  In the case of a cormorant cull in Ontario, the evidence is lacking OR if it exists, it has not been shared publicly.  Rather than shooting cormorants I plan to continue to marvel at how they make a living.  My kiddos are in awe of these birds and are smart enough to know that IF there are too many cormorants, Mother Nature (i.e., ecological and evolutionary processes) will reduce cormorant populations without us having to pick up firearms.  I am an angler, outdoorsperson, scientist, and advocate for evidence-based decision making and I am utterly opposed to the cormorant cull.  The scientific case for a cull has not been made and this whole thing smells fishy.  It is time to realize that it is our behaviour that has impacted the health of our aquatic ecosystems rather than trying to deflect attention to cormorants.  Imagine what would be possible if the same advocacy efforts and attention that have been devoted to enabling the cormorant cull were instead focused on advocating for investments in habitat restoration and water quality improvement.

Stop the Fall Hunt of Double-Crested Cormorants in Ontario