In the May issue of the Procyon Post, we wrote about the little raccoon, Kai and his siblings, who sadly did not make it.

Since our readers have been asking about how Kai is doing, Procyon Volunteer Joanne Scott has given us a short write-up on Kai.

Little Kai has come a long way since first arriving at Procyon, and then coming into my foster care. He is thriving, although he continues to be tiny for his age.

When Kai and his two siblings first arrived, their umbilical cords were longer than their bodies! Their mother had died while protecting them from the farmer’s dog, and the babies were discovered in the barn where they had just been born.

Sadly, I was unable to save two of the babies, but Kai is a survivor. Although he loves walnuts, dog kibble and fruit, especially grapes and bananas, he continues to receive a bottle of formula each evening. 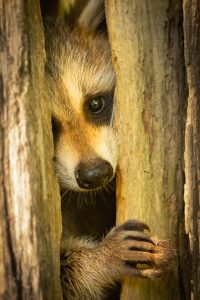 I had to tube feed Kai for so long, he missed out on the comfort of suckling as a tiny baby, so he gets his comfort from a bottle.  He loves playing with two other foster raccoons, Petey and Sarah, and each day they receive lots of enrichment in order to learn the skills they will need to survive on their own.

They especially enjoy one particular dead log that is hollow and cracked open vertically from top to bottom. They love to scamper up and down and poke their little heads out from the crack.

Providing enrichments allows them to learn and explore nature before they are released into the wild in September. They are happy to be in their outdoor enclosure, where meals await them, and there are plenty of hammocks, a nest box, a small water pool and other forms of stimulation.

Kai has already received the first two vaccines for parvo and distemper, and has been thoroughly de-wormed.

He is the picture of a happy and healthy little raccoon!

Below are images of Kai and Petey at play in their outside enclosure.