Well, here we are again. Another month has gone by with Covid-19 still upon us. Masks are becoming the norm for most of us. And baby wildlife is coming out of the woodwork.

I do a weekly 6-hour phone shift for Procyon now and have been introduced to another part of the rehabilitation world. I have had to say no to raccoon babies. Why? Because we just cannot take anymore. We are small. We had lots planned for building extra space, but all got cancelled. Fundraisers have been cancelled. Not as many volunteers to keep everyone as safe as possible and so many babies out under foster care.

However, this does not mean you should take them into your own hands. If you find a baby, please. DO NOT FEED. GIVE IT NOTHING. This is something I will be mentioning frequently. Each baby has a special diet, they may have to be tube-fed, they may need to be hydrated first before food is introduced, they may aspirate meaning the fluid can get into the lungs, thus causing pneumonia and if not dealt with immediately could lead to death. I cannot stress this enough. Call us immediately. Get it to us ASAP. But make that call. And never just bring it in and leave it. It must be set up first. Legally under MNRF regulations, you have 24 hours to get it to a rehabilitation facility. If found in the evening or early morning hours they will be fine; they would have been sleeping anyway. Please let us handle it. You did your important part. And for that, we thank you greatly. Now it is our turn to take over.

Now for some stories on some of our patients. Just for something a little different. 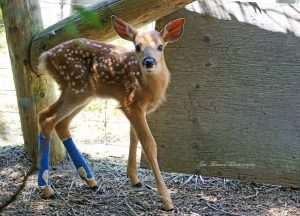 On June 10th, my 9 am call was for an orphaned fawn. Mom was hit by a car in the wee hours of the morning. I went and picked it up because the man couldn’t go; it was luckily close to my home. And I took it to Procyon. While waiting for it to be admitted I noticed it standing on its heels. Not on the hooves of its hind legs. I told Crystal the animal care coordinator and she dealt with it right away. This fawn was so very tiny. The tiniest I have ever seen. Only about 3 days old. 4 tops. The vet was contacted and an appointment was made. But for now, her little back legs were wrapped. I went in the following week and couldn’t believe my eyes. Her legs were still wrapped but she was walking normally on her hooves, and already had grown quite a bit. Her vet appointment was good. Her tendons didn’t fully develop in the womb, but this little girl was going to be okay, two weeks later. Wraps come off in a couple of days. She is running and playing like nothing was ever wrong. Another success story. 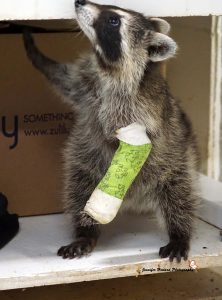 Another little raccoon baby needed medical care for an arm she wasn’t using. She had to be separated from her siblings and watched carefully. We temporarily wrapped the leg until the vet was available and she was given meds and kept quiet. She ended up with a very pretty, green cast put on by Dr. Sherri Cox, after much-needed x-rays showed that she had a little cracked bone in her elbow. Well, she wasn’t even bothered with that cast. She felt so much better she was ready to rock n roll. So as the volunteers were in that room feeding and cleaning this little one got to come out for a little bit of playtime. Being cooped up in the cage was not on this raccoon’s agenda. She is so funny and so adventurous. Watched carefully while out and about. Playtime over, back in her nice clean cage with a full tummy. Naptime snuggling with her stuffies is inevitable. As I stood there watching her, she gave in to a nice afternoon nap. Sweet dreams little one. The cast comes off soon, as babies heal fast, in a couple of days.  Soon she will be reintroduced to her siblings, where she should be and her life begins again. Romping and playing, learning, exploring and becoming a raccoon. 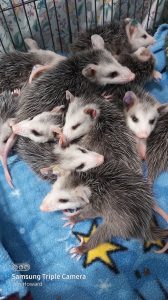 Now for a passel of opossums. 13 to be exact. 13 snuggly cute as a button, baby opossums. But orphaned baby opossums. Because a dog killed their mother. Please keep dogs on leash. And please check your yards in the early morning and early evening before letting them out. In fact, we take our dogs out on leash in our yard. In the early morning and from early evening onward. For their safety and whatever may be passing through our yard. 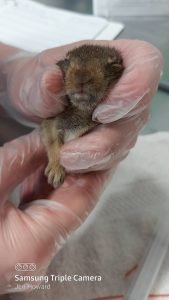 It’s natural for cats to be outdoors, right? Wrong. Cats are domesticated unless they are feral. They are responsible for over 1 million deaths a year in wildlife babies of all shapes and sizes. Especially birds, bunnies, squirrels etc. It’s not their fault, they are predators. And they are also prey to larger wildlife predators. Also, not the predator’s fault if your cat is taken. They are one of the reasons we get a lot of our baby animals in. Those and off-leash dogs. But this story is about an outdoor cat. Just being a cat. A cat that caught a young squirrel. The owner heard it and came running out and rescued the squirrel quickly. But the damage was done. She called Procyon right away and I took the call on my shift. Set up the admission and they were on their way. This little squirrel came all the way in from Owen Sound. She was very lucky. Her very swollen leg healed fast with rest and medication. She was then put in an outdoor enclosure to make sure she could use her leg okay and be a squirrel and do what squirrels do. It was a short stay thankfully for the squirrel. The finder/ rescuer contacted us every 3 or 4 days to see how she was doing. 3 weeks later she was ready to go home. The lady came all the way back with a carload full of donations for Procyon from the local people. The squirrel did the drive all the way back to Owen Sound. Left the nest box within the hour after it was put up in the tree. And leaped from branch to branch. Hasn’t been seen since. Off adventuring in the wild where she belongs. As for the cat. He is now grounded to the indoors. 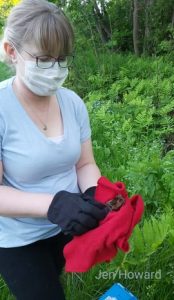 I was recently on the release of three big brown bats. They spent the winter with us. Now given the okay for release these three had to go back to where they came from. Three bats; three places. All success releases. So amazing to see them go free and to hear them vocalize their messages of sheer delight.

As for the many little raccoons we have, many are now teenagers. Full of mischief, fun, and adventure. Now moved to outdoor enclosures to learn to be raccoons, so come fall, they can be released.  Still, some late babies indoors still being fed bottles. 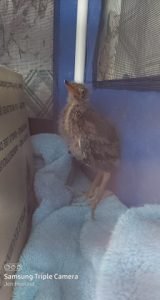 One more little story that I want to share with you. This summer seems to be up and down with temperatures and storms. Last Sunday (Father’s Day) we had storms go through various regions. Someone found a tiny little soul looking like it was clinging to life in a parking lot at 9 pm that day. It was taken to Procyon. It was hydrated and put into an incubator, but it could not hold its head up and was not thought to make it through the night. Monday morning Crystal arrived to be greeted by a very feisty little life. This little life was not the norm for us to get in. It was a green heron fledgling. Most likely misplaced during the storm in those extremely high winds. It was rather in shock from its horrible adventure. I drove to the Center, picked it up and drove it to Shades of Hope in Pefferlaw as Procyon does not provide rehab care for birds. Thanks to a very observant person and making the call right away to Procyon, this little heron should make a full recovery and be returned to the wild.

The job is never done. You finish one lot, clean cages, give fresh food, freshen up the bedding, do the laundry and dishes. Prepare food for outside animals and do it all over again. Next shift, the same. Admissions, phone messages to answer, releases. Heartache when one is lost, despite everything we can do. And sad hearts when we must turn them away. Most orphaned babies or injuries could have been avoided if only people would think first. In one week alone there were a handful of does killed due to off-leash dog attacks with fawns. Not all survived as they were attacked as well. One was never found. Losing one is too many to such a senseless horrible death. One that could have been avoided. Wildlife was here first. They share their space with us, not the other way around. We have taken and continue to take away prime habitat. Forcing them into our space, they have no choice. Isn’t it about time we made and saved some green spaces instead of just taking away and developing everything? Be responsible for your pets. Learn to coexist with our wildlife.

I have a beautiful fox pass through my yard every day, hunting for her family. I look forward to seeing her and even more forward to seeing her young one day following her. I rescued her a few years ago with her 2 siblings with severe mange. To see her now with her own family and mate is overwhelming. I have been very fortunate to see one of her beautiful kits a couple of times on my walks, not quite out and about yet. All so gorgeous and healthy. This is my life, what I live for. What every wildlife rehabber lives for. Every life is special, every life touches us greatly, and every loss hurts. But we move on to the next and do our very best. Behind the scenes in a wildlife rehab are many very special patients with many very important volunteers.  But we couldn’t run without you, who keep those critical donations coming in to help keep us going. So if we must say no to an animal in need, it’s for a very good reason. We can only care for what we can safely house and look after. For the safety of the animals. It saddens us greatly to have to say no. It’s not taken lightly I assure you. But this year because more people are home and more dogs and cats seem to be running loose, it has been that much worse than other years. So please, let moms be moms, keep dogs on leash, in fact, that is the law, and keep cats indoors, it is safer and healthier for them. Go to ontariowildliferescue.ca to find the nearest wildlife rehabber nearest you or call Procyon wildlife at 905-729-0033. And make that call right away, for life’s sake. Do not keep, water or feed.

“Life is In Your Hands”

A Day in the Life of a Wildlife Rehabber