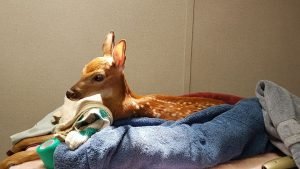 This from a fellow Rehab Centre:

LATE NIGHT RESCUE
A young fawn was spotted in East Toronto yesterday. She was stuck in the rocks in a creek and appeared to have been there for some time. Thank you Ann & Team Chelsea for being available late evening to rescue this little one.

Once examined, it was clear she had been attacked by a canine and her wounds were hugely infected and full of maggots. After 2 hours of critical care, she was looking and feeling much better. Still, on IV fluids, the youngster is not out of the woods yet.