This month, I’m going to write about something a little different. In wildlife rehabilitation, every little life you get is very special. Its life depends solely on all the volunteers that have dedicated their time and who have received the training to do this very special job. Sometimes, the help of dedicated wildlife veterinarians is also needed to help the sick and or injured. Wildlife rescue and rehabilitation can’t be done without teamwork of all those involved and that includes you.

Your donations and support are what makes it all possible for it all to come together. Sadly, not all lives make it despite all we do. But every one that does, brings huge smiles to the faces of caregivers at release time.

The centre wasn’t quite open yet for spring arrivals when an important call came in; one never really knows when wildlife moms are going to start having their wee ones. 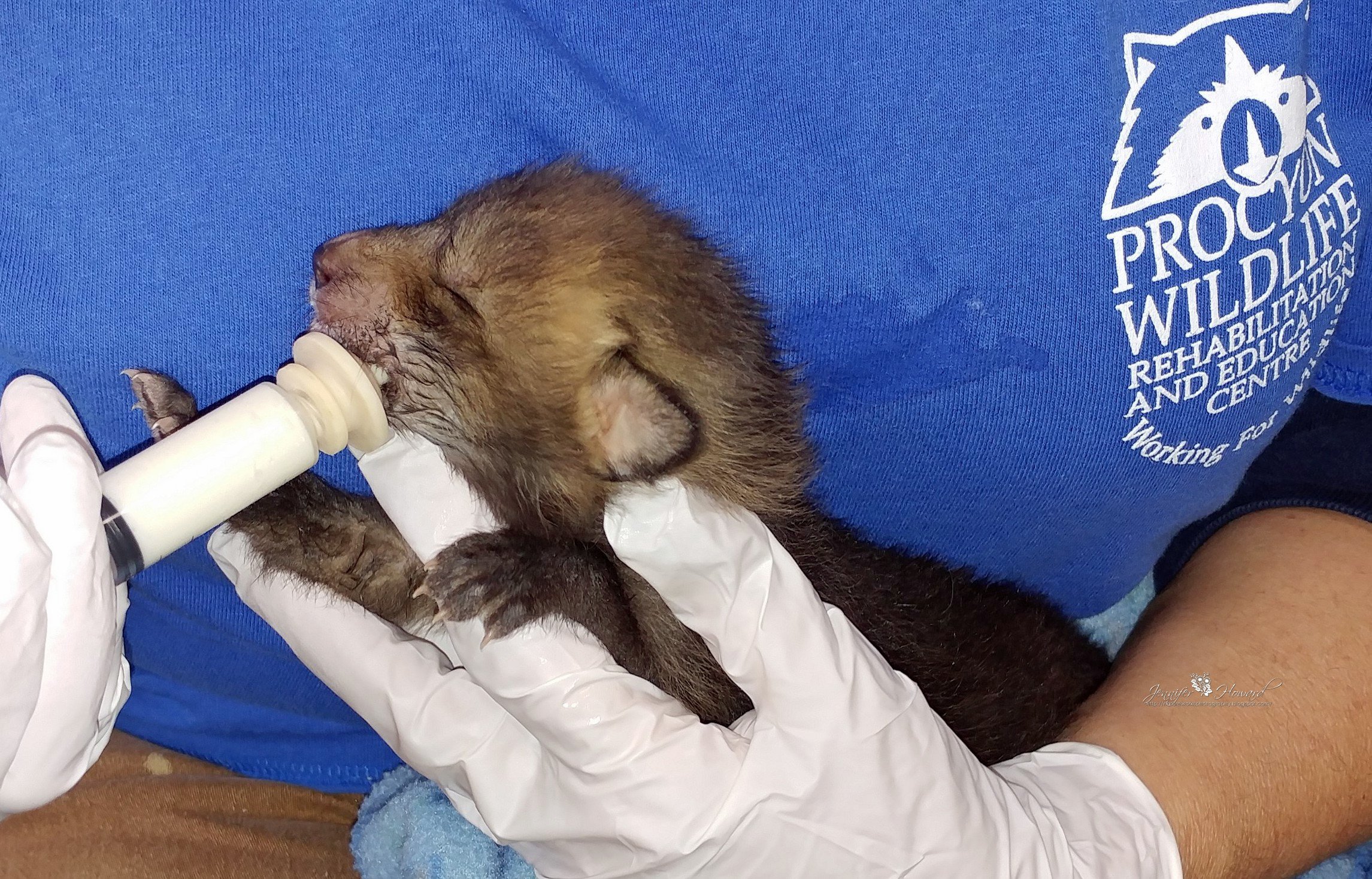 In this article, I’m going to tell you about one little life that arrived early, was orphaned, and made an impact on everyone. Sadly, her Mom or Dad and other siblings were never found. The rescuer realized that this wee one needed help asap. It was March. Winter was still upon us; it was cold with lots of snow. Spring was just around the corner.

It was a quiet area, just a basic day, when the rescuer noticed something on the front lawn; “but what was it, what is that?” There was this tiny little animal clinging to life, huddled in fur possibly from its mother, from its den, where it had slept peacefully until something got it and took it away. No one really knows what actually happened, but no mom was ever seen; the poor thing was crying, dehydrated and cold. All alone this “eyes closed” baby, first thought to be a raccoon at the time, needed help right away.

So, the finder put the tiny babe into a warm snuggly box and called Procyon Wildlife Rehabilitation Centre. Officially not open for the season, but soon to be, in spite of this, that babe was not turned away. It was picked up and driven to a foster volunteer to be cared for around the clock.

However, upon arrival this wee girl thought to be a raccoon infant by the finder was none other than a tiny red fox. Also grey in color at that age but with a wee little white tip, typical of the red fox on the tip of her tiny tail. And her teeny tiny little feet, omg so cute but not raccoon feet. Just an amazing little life. A very easy mistake for the finder who was only really focused on one thing, and that was getting this tiny life much needed help, now. A very, very lucky little orphan. Beautiful little female that was later named Talitha.

Talitha’s life was hanging by the threads for the first while until they could get her stabilized. She had to be warmed slowly to avoid frostbite and needed to be given fluids to hydrate her tiny body. This “eyes closed” baby was stealing the foster volunteer’s heart who worked so hard to get this baby to come around and get her stabilized. 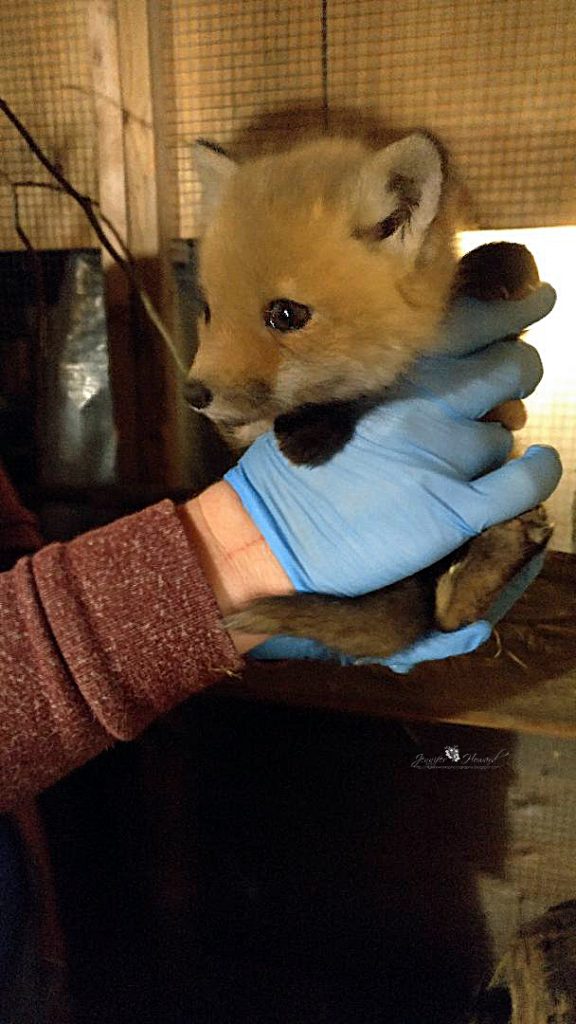 When Talitha was ready, she was introduced to a special formula that was as close to her mother’s milk as they could get. All wildlife babies need special diets; never give cow’s milk to a wildlife infant. Their lives depend on it. You can do more harm than good to a baby by feeding it the wrong food, quite possibly even causing it its life. They need to be in the hands of someone who is trained, so always get them to a wildlife rehabilitation facility as soon as possible. If you should ever find a wildlife baby, please do not try to care for it yourself; they can easily aspirate and become deprived of oxygen. So, this formula was introduced to Talitha very slowly to alleviate any further problems and to keep her going in the right direction, and that is exactly what she was doing. She was improving.

Her eyes opened a few days after her arrival. This beautiful wee girl was now introduced to the big world that surrounded her. But she didn’t see her mother and siblings. She saw a human mother and four walls, not a den. Care is taken to “cover up and be silent” as these babes grow since they must remain wild.

She was given enrichment items to help her be comfortable, to snuggle with and remind her of mom and to play with as she grew. People who give up their fur coats to Procyon have given these babes the comfort of what their moms would have given them, well, as close as one can get. One can never replace wildlife mothers. The babes just snuggle right in there, it’s wonderful. Off to la la land they go. Thank you to those who have given up those furs to wildlife orphans. And, for not supporting those fur trade companies. 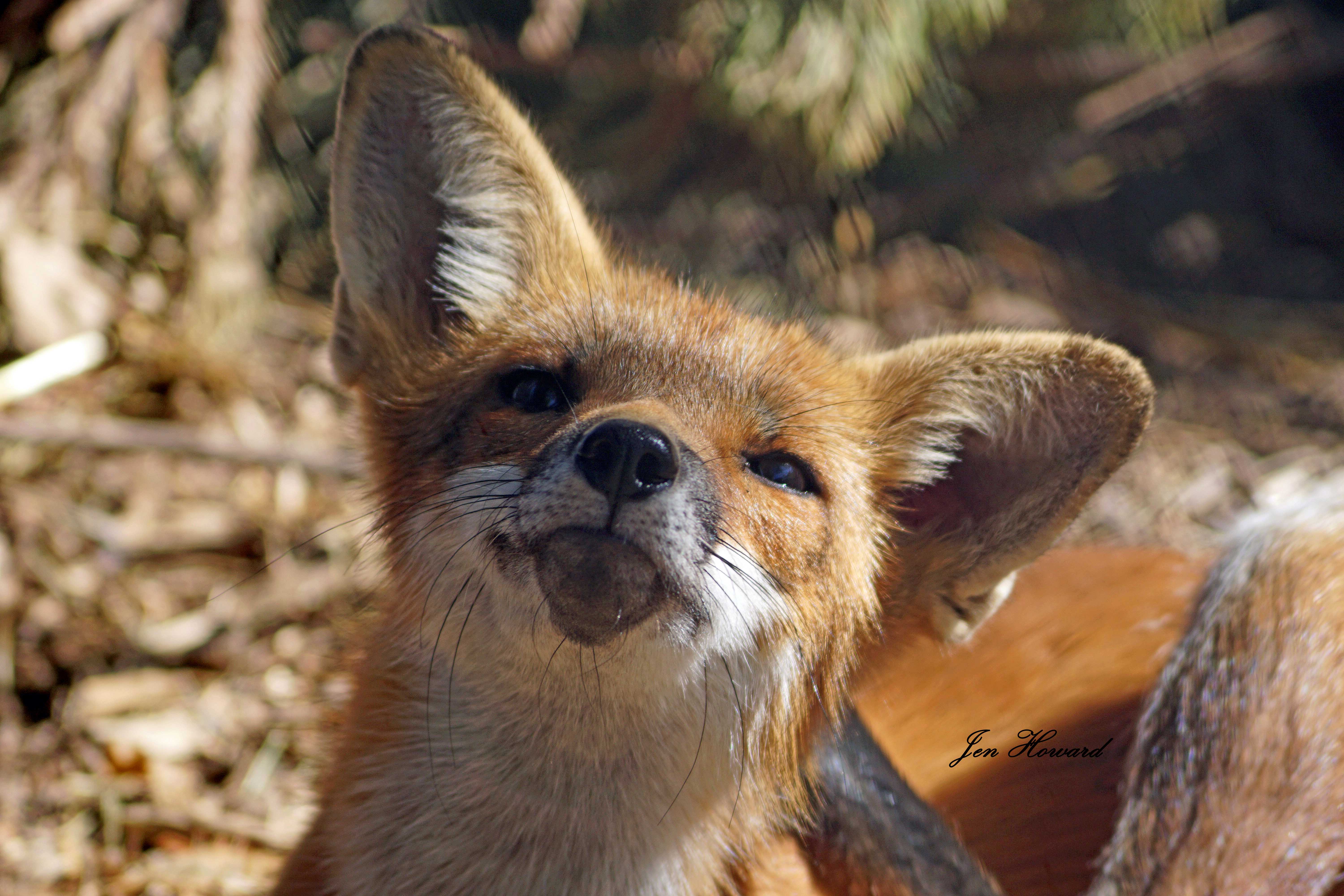 As Talitha grew, she was moved from her crate to an enclosure with stuffed toys and places to hide, other toys; soon she graduated to food in dishes. She played hard and she slept hard. She was a growing girl after all. But despite all the efforts to find another kit to keep her company, none were to be found. Babies need company to thrive, to learn from each other, to play with, snuggle with, and romp ‘n roll with each other; just being babies. Otherwise, a lonely babe is a depressed babe. Talitha was lonely but she kept herself well amused as Procyon kept her well stocked with things to do. She hit everybody’s heart that one. Then one day that call came in, another fox kit was found at another facility. A wee bit smaller by a couple weeks or so; it had injured tail which needed to heal. This little one would be introduced when the time was right. 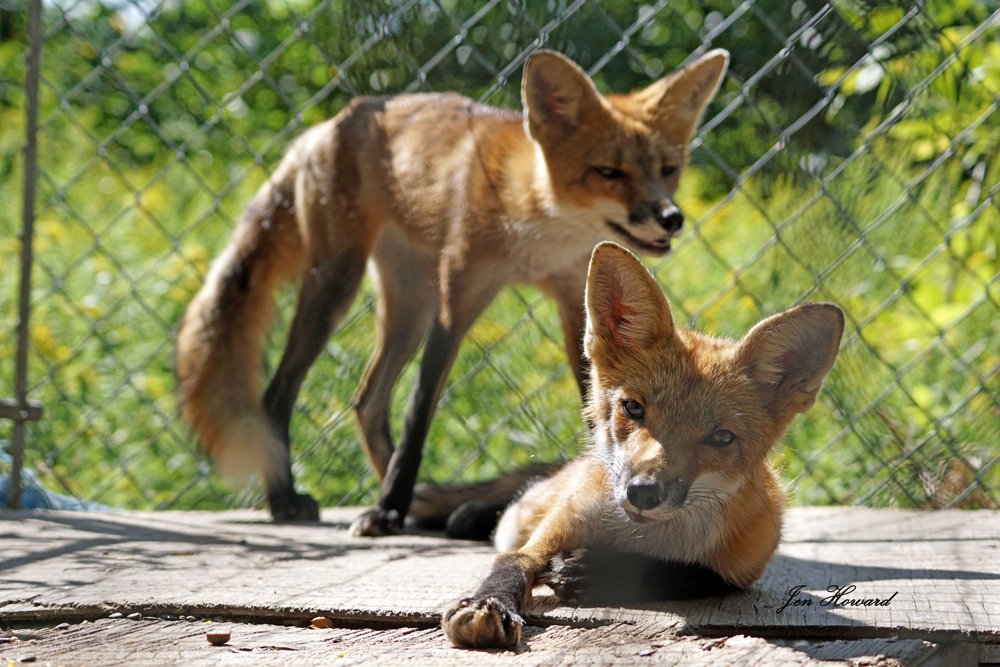 The two were introduced finally and watched closely. The new kit was a bit shy at first and Talitha was a little go getter. What a beautiful fox she was growing up to be; one could say dainty in her beautiful slender face. Her amazing happy tail that did a lot of wagging just like a puppy. The two became good buddies quickly. Soon they were put into a nice large enclosure. They played and they squabbled a bit, just like all siblings do. They slept and napped together, they were doing great and getting close to release time. Then they were inoculated to keep them healthy. Soon it was time to find a good location which would be safe with plenty of shelter and a natural water source nearby. These two were ready to go free and be wild. How they both had grown in so many ways; now ready to do what they were born to do.

September 5th, 2019 was Release day. A beautiful sunny evening was in store and a perfect location had been picked out. The kits were both napping together in the summer sun, in their enclosure, their beautiful red coats glistening. One eye opened, another, big stretches, big yawns, they seemed to ask, “okay what’s going on?” With curiosity they got up and started to move around and eye every movement made around them. The carrier was put into their enclosure for them to get used to it, so they could inspect it and check it out, become comfortable with it. 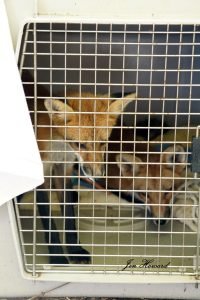 With a little bit of effort, the catching of the two healthy, feisty fox kits, who had other ideas, was complete. The release was on. Talitha was first caught and stayed at the front of the carrier like she knew this was it. She was excited. That beautiful face looking out at us while we caught up with her buddy. She put her foot on the door as if to say, “thank you but let’s go.”

She made him stay at the back of the carrier when he entered her space. She was ready. He was nervous. Covered safe and secured well, we were off. A short drive later and a carry through a field, we were there. Talitha was still sitting at the door with her buddy laying in behind her. Volunteers in their places and cameras were ready. The door was opened. Talitha wasted no time as she bounded out of that carrier and bounced through the tall grasses right back into the wooded area; never even looking back. Talitha was free. Her buddy however decided he was fine where he was. It took a bit of enticing to get him to come out, but he finally decided to run for it. He took a turn and ran straight in my direction, right by me full speed ahead and bounced like Talitha through the tall grasses into the forest. They didn’t stay together like we hoped, but knowing that they were in proximity, it is more than likely found each other again later that evening. The perfect release. The perfect evening, the sun setting with the skies of an amazing sunset on the way. Talitha and her little buddy were now free to roam, to explore, to play, to hunt, to grow up and have their own little fox kits; the way Mother Nature intended. 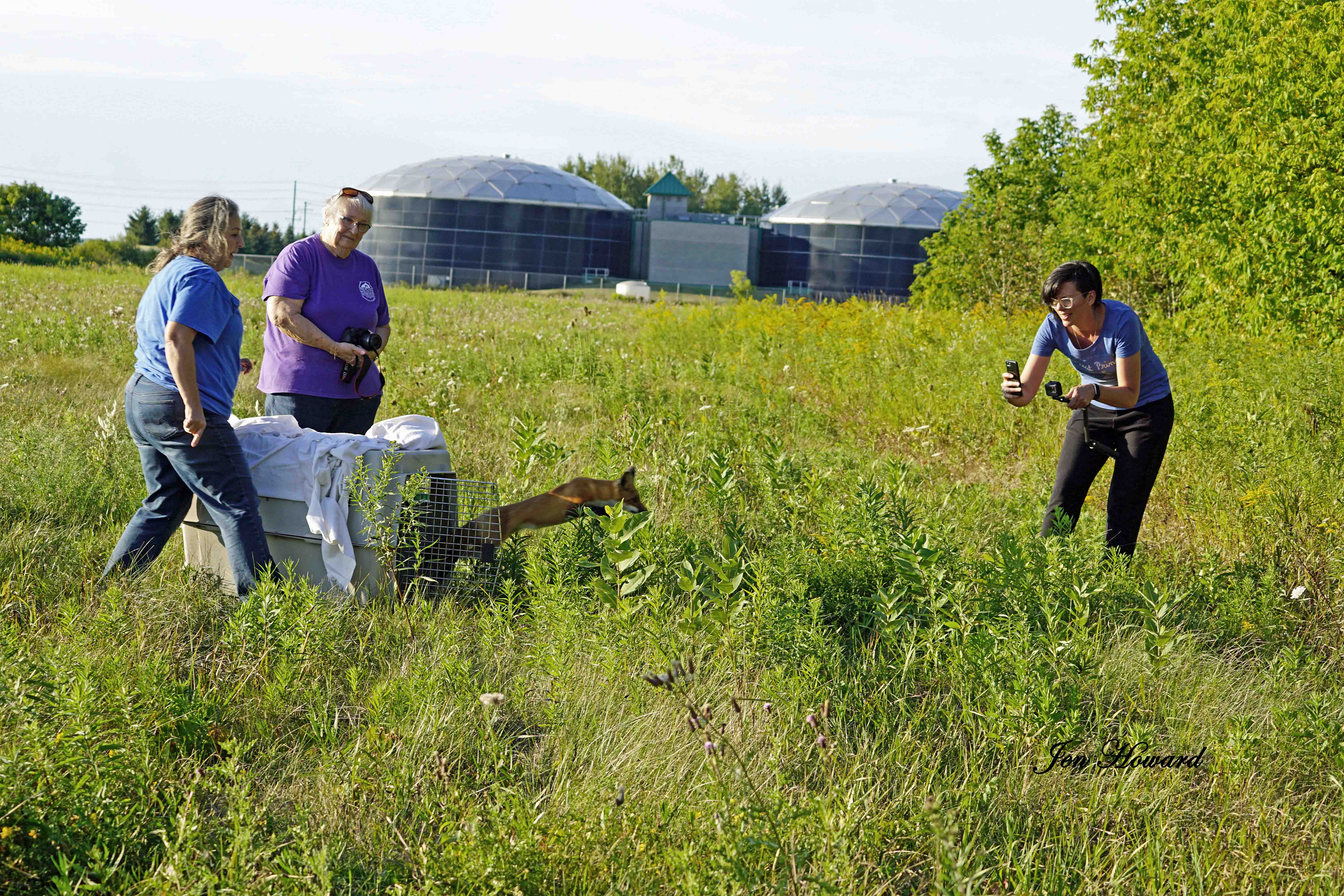 I have seen fox kits many times before, rescued and released them, but I have never seen one oh so tiny with eyes closed. To see Talitha getting bottle fed tail wagging and making her little amazing noises was such a beautiful thing to see. This little miracle of life had a hard start, almost didn’t make it, but live, she did. To see her snuggle in her fur, then go into a bigger enclosure romping and playing and having a grand time, chasing her toys, throwing her stuffed toy, biting it, shaking it like it was a prey animal, being so fierce like she was catching her dinner, then snuggling into it and falling asleep, wagging her tail in delight and then crashing from pure, totally joyous exhaustion, beside her stuffy, was just amazing.

Then seeing the two fox kits together in yet a bigger enclosure. Fishing for crab apples in the pool, searching for food spread out throughout to teach them how to hunt, their natural fear kicking in and their curiosity; such beautiful wildlife babies.

A big thank you to the friendly lady who saw something tiny and heard the cries on her front lawn one cold March morning, who knew who to call and did so quickly. Thank you to all the volunteers who helped care for her, especially to her foster mom Sarah; when she arrived, you knew exactly what you had to do. You brought her through that tough time. You were amazing. You were dedicated 24/7.
Be free Talitha and your cute little buddy. Be safe and grow strong. Live a long beautiful life❤️ You taught me so much about a little teeny tiny fox kit’s journey of life. 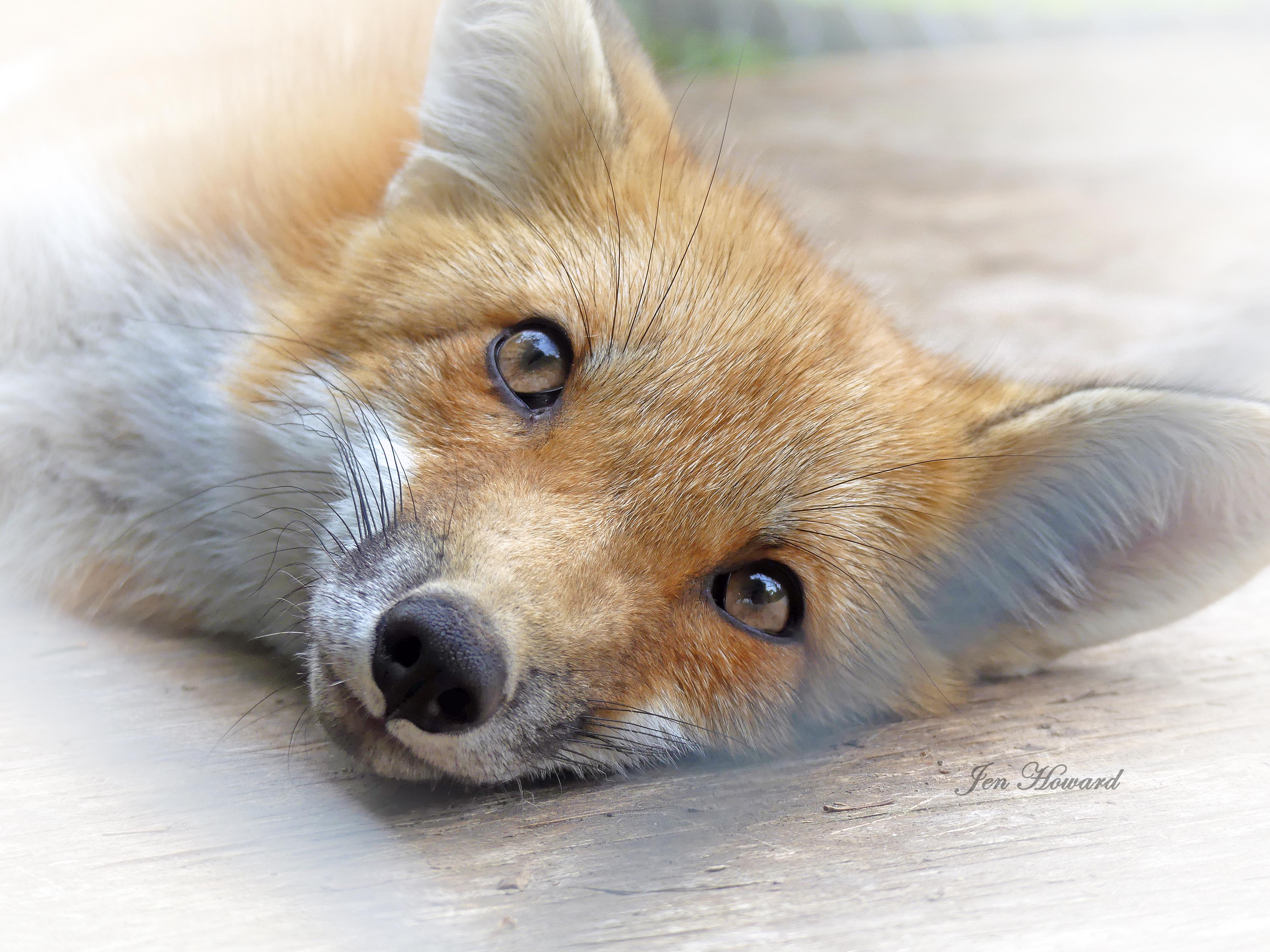