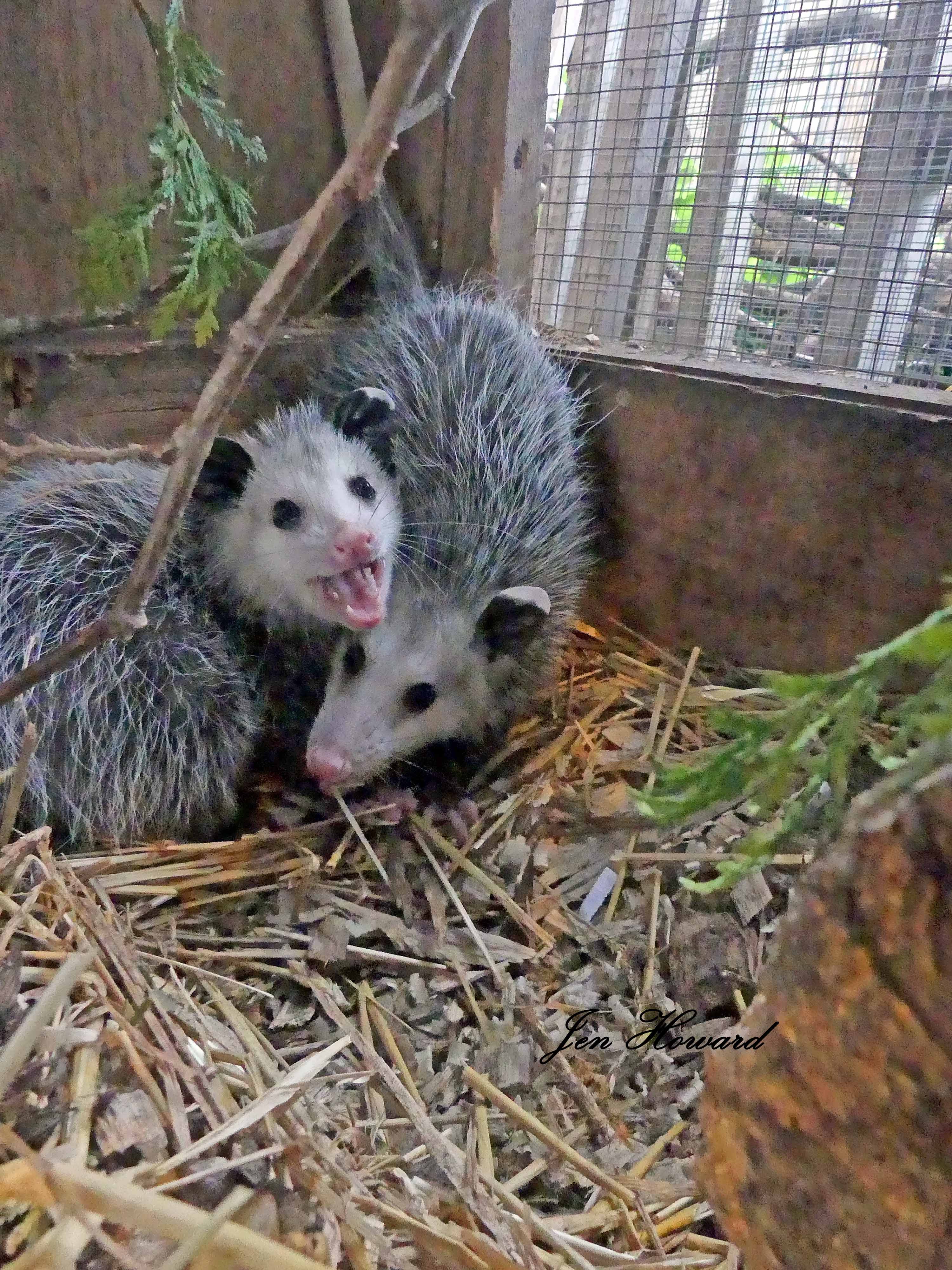 Nope not a kangaroo, or a koala, but a beautiful little Virginia Opossum. Our one and only marsupial here. Yes that’s right, they have a pouch. Just like kangaroos and koalas.

Opossums have been around some 70 to 80 million years and that actually makes these little guys one of the oldest surviving mammals on the earth today.

A single opossum can eat 4000 ticks a week. That’s a lot of ticks. And we don’t want ticks so they are great to have around. We don’t want ticks around our pets or ourselves since they carry disease. But amazingly opossums are very unlikely to contract Lyme disease from the tick, therefore the tick that feeds on an opossum will not pass on the disease to another host. And these guys are little tick eating machines. So I say bring ‘em on.

They also love fleas, another one which we don’t love. They also eat eggs, insects, carrion, invertebrates, rodents, rotting fruits, leaf and log litter, even venomous snakes, if you had them.

They have an incredible immunity to toxins actually, such as rattlesnakes in which we have one species, massasauga rattlesnake in Muskoka areas only, scorpions not here of course, bee stings and also botulism. So incredible.

As you can see they are an important little animal to have around and great for taking care of those garden pests and rodents.

They don’t see well but they do have great little sniffers, meaning their sense of smell is pretty darn good. They are nocturnal, which means they forage at night.

Although they do not actually hibernate during the winter, they do slow down and spend more time in their dens, nice and cozy.

These little mammals have learned to adapt here, probably hitch hikers in trucks across the border from southern states. They are not from here (non native.) They can easily get frostbite on their ears, toes and tails in extreme weather, because those parts have no fur to protect them.

If you see a dead opossum on the road in spring time, and it’s safe for you, your safety always comes first, and I stress this all the time, then please check it for wee ones in the pouch. Often a mom who has been hit by a car, will have young ones in her pouch and usually they are unharmed. Take her to a rehabilitation facility, but call first and explain the situation. The rehabbers will remove the wee ones from her properly and safely and hopefully they can save those precious little lives. 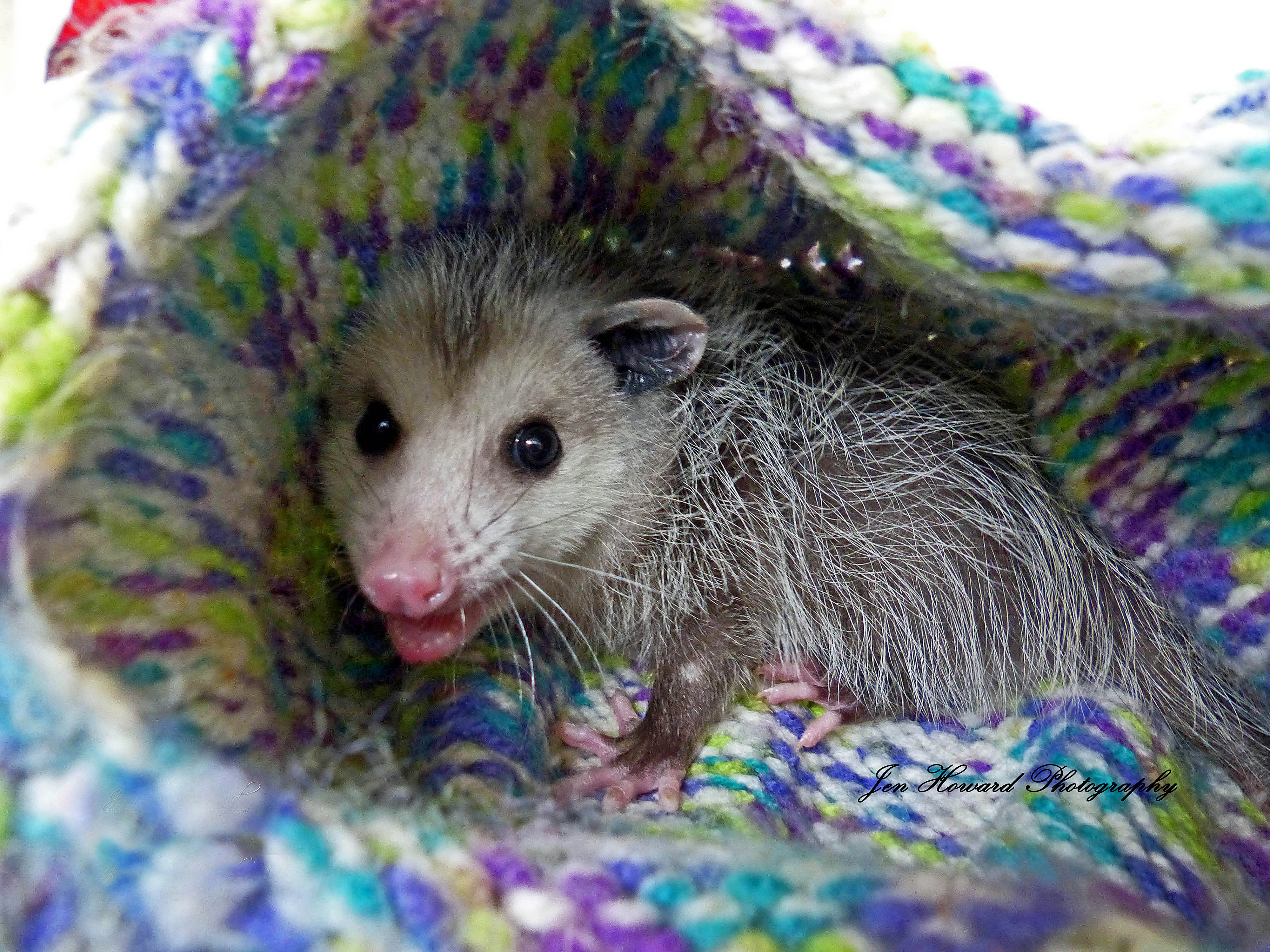 Baby opossums are amazing. Their eyes open around 58 to 72 days. They wrap their little tails around things, like the adults to hang on and feel safe. Those tails are pure muscle and hanging on with them is no effort at all. In fact the adults even use those tails to help build their nest however they do not build their dens. Instead they use abandoned dens of other animals, for example foxes or skunks.

They usually live in wooded areas and like to be near water.

Little ones are so cute. If they lose their mothers and end up in a wildlife rehabilitation facility like Procyon Wildlife, they love to snuggle in their little knitted beds or hammocks which are made and donated by people. They like to run on their exercise wheels for their enrichment, hide in logs, etc.

But if they stay with mom, God willing nothing happens to her, they come out of her pouch at 3 months and cuddle in the den, then when she leaves the den they climb on her back, they then leave her around 4 months of age.

This seems young, however since they have such a short lifespan it really isn’t, as they grow quickly. Some folks say they look like a big rat and don’t like them, but in reality they have a look all their own. I love opossums. The lifespan of these animals isn’t very long. Only 1 to 2 years, possibly 4 if in captivity. Not long at all. Mainly because they get killed on the roads, pets get them or other wildlife.

They are also a solitary mammal unless it’s mating season or while they are rearing their young. The gestation period is 11 to 13 days and normally occurs between February and June. They give birth to approximately 12 to 13 babies, upwards to 25. They are tiny and pink those babes, the size of a grain of rice. Absolutely amazing, little miracles of life. However if a mother has more than 13 little ones, the only ones who will survive are those who are able to crawl using their front legs only, to get to the mothers pouch and latch on. This is where they nurse and grow, protected by mom.

Why do they get there using only front legs? Because when they are born the back legs are not fully formed as yet. One of my favourite things on an opossum is their cool feet, pretty black and pink feet. Their rear foot has no nail on the thumb, this is called an opposable thumb, which is very cool. This is normal though, because they are climbers, not great at it but they can climb, this enables them to get a good strong grip. 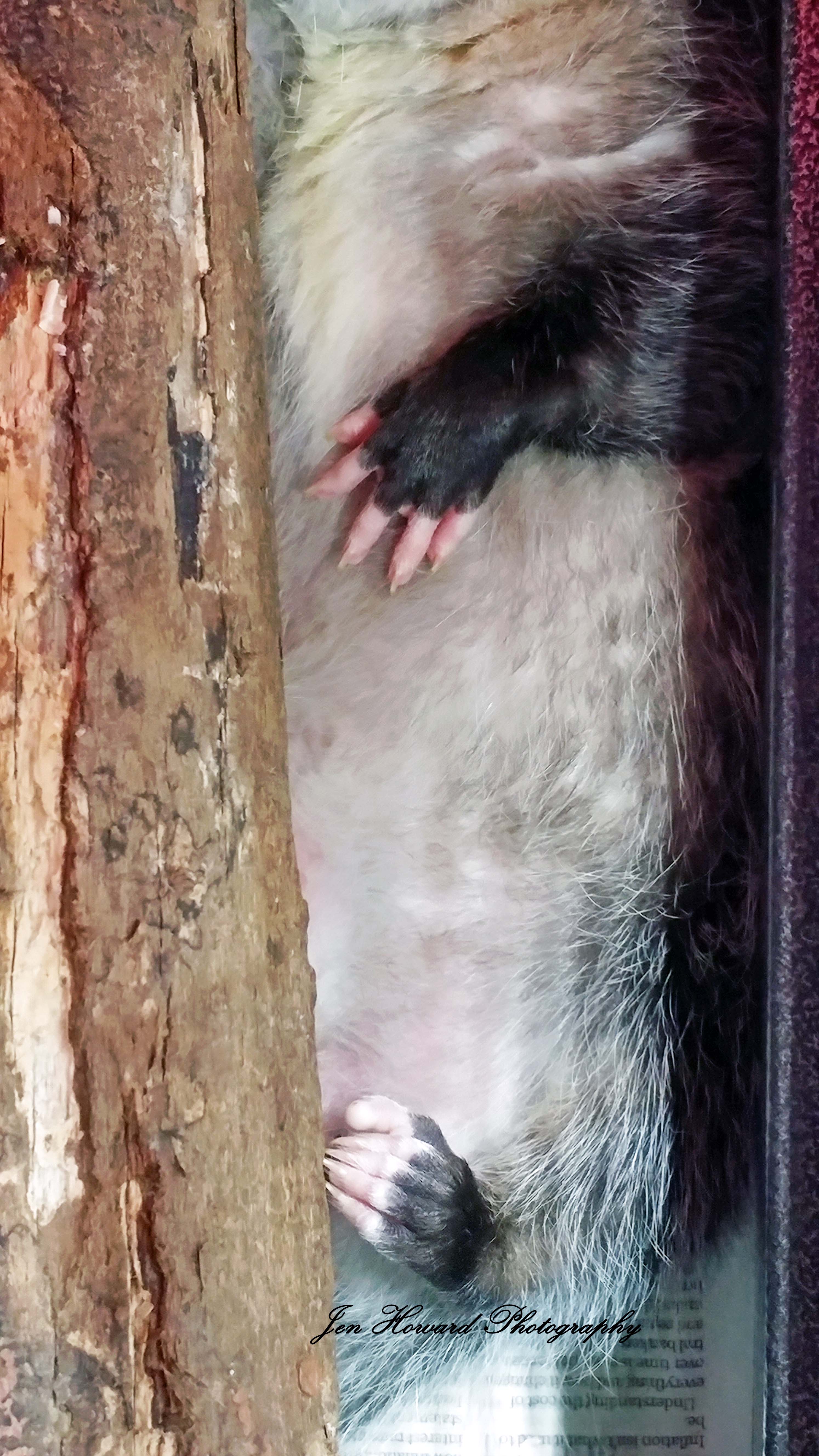 Opossums can’t run fast, and if they are scared they will become very still and open their mouth to show you their pearly whites, all 50 of them. And that is very intimidating, I tell you. If they are really threatened, they will play dead and can do this for approximately 4 hours give or take. This is an involuntary act, bodies stiffen, they drool, they can let off their scent gland which smells really bad. Breathing slows down. Generally at that point whatever predator threatened them gives up and goes away.

Unfortunately, as per usual, as mentioned earlier, the biggest threats to these mammals are humans, pets, traffic, and extreme temperatures. I would also say habitat loss because that is happening to basically everything. And again, that is humans taking that habitat away to use for themselves.

Little do people seem to know this is also harming them in the long run. Trees are our clean air, wetlands are our clean water filters. It goes on. But humans are greedy and don’t think about any of that or any other life forms, it seems; my opinion, from the animals, I have rescued and from what I see going on around me. It is disheartening to see the animals dispersed from their homes, and into harm’s way, ending up injured in a rehabilitation facility like Procyon or worse, dead. It’s very, very sad.

Oh and one more thing. People seem to think opossums are not smart when in fact they are very intelligent; they can remember areas where food sources are good, better than dogs, cats, etc. Often this is why they get killed on our roads because they are scavenging for food at the roadsides ,so please please do not throw food on the roads for the sake of all wildlife.

Of course opossums are wild animals, so yes, they can be dangerous if cornered or threatened, just like any other wildlife can be. But in general they are calm and easy going. Respect them, give them their space and do not feed them.

I hope this has helped you to learn and understand our one and only little marsupial. I have had the opportunity to hold a couple wee ones in during rehabilitation, little orphans. Incredible little dudes. As I said earlier I love opossums. Great little clean up machines working in our favour. Hope you will love ‘em too.

Our One and Only Amazing Marsupial