Bats are amazing mammals. Going back some 50 million years on this earth. But there are many myths about bats that have made people fear them. To name a couple: they get in your hair, they suck your blood like vampires. No and No. Bats are amazing insect eaters. Using echolocation to catch their food. Eating somewhere up to 5,000 insects per night per bat depending on the species. This may sometimes bring them rather close as they are homing into the insect buzzing around your head. I say, come and get it, insects love me, so help yourself. They will not get into your hair. They are an asset to our forests, farmers crops and us.

Worldwide there are something like 1,100 species. Here in Ontario, there are 8 species; the red bat, hoary bat, silver-haired bat, northern long-eared bat, big brown bat, little brown bat, eastern small-footed bat and the tricoloured bat. All of those aforementioned bats are designated specially protected mammals. Three of these species are listed as endangered; the little brown, tri coloured and northern long-eared.

The white-nose fungus is said to be a cause in declining numbers. This fungus makes the bats sick by consuming their fat stores; they literally starve to death. You can see it by the white fungus that attaches to the tiny bat’s face and wings. This illness has killed millions of bats to date. It hits them while hibernating in cold dark damp places in large colonies. It affects bats by waking them up during winter hibernation. And in doing so they burn up their winter fat store. They may even be seen flying outside during the day in winter where they can freeze to death. This is the reason the three species mentioned earlier are an endangered species now.

Biologists are working on a cure as we speak, and it is being tested in certain areas. We as home/cottage owners can help by buying or making bat houses. I believe you can buy one from 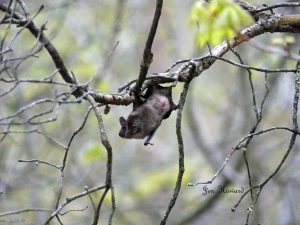 Georgian Bay Biosphere Reserve where the cost goes toward future bat projects. Canadian Wildlife Federation also has a bat program you can get involved with. Houses need to be painted black, as black attracts the heat to the inside of the bat house. Inside is not painted. This enables the bats to colonize in a dryer climate and in small numbers. Lessening the chance of contacting white-nose syndrome. You can get bat house patterns online and make your own or through these places. I believe Toronto Zoo’s Adopt a Pond also has a program.

As I mentioned earlier, bats are mammals, they give birth to a live baby called a pup. Most species of bats give birth to one young once per year, however, some species have more. An interesting fact is that bats actually have delayed fertilization. Storing the sperm while overwintering in a hibernation state. Then when the time comes gestation lasts from 45 to 90 days before young are born which is generally in late spring to early summer.

Mother bats produce milk to feed their young. Get the scent of their pup and the sound of the pups call so they can locate them in the nursery right away, and they also carry their pup as well. Bats can live a long time. Especially the insectivorous bats, a whopping 25 to 44 years. Of course like everything these days there is so much that stands in the way of them living this long, injuries or illnesses and the use of pesticides, etc. Bats communicate with each other through vocalization, physical interactions and displays.

Bats are very good for agriculture, nocturnally providing free pest control unbeknown to the farmer. This would be great except for pesticide uses. Another issue that is hurting bat populations is wind turbines. For some reason, these big beasts are always located along a major migratory path of birds and bats, and have taken a toll on bat populations. When bats come close to the blades it is said that there is a significant change in barometric pressure, this causes the bats to become disoriented, it causes imbalances in blood pressure, heart rates and respiration. Another suggestion is that the barometric pressure drops and the bat’s lungs collapse. At any rate, wind turbines are posing a problem for bat populations everywhere the two meet.

Rabies is another worry amongst people and bats. One which is quite misunderstood. Rabies is a very fragile virus and can not survive unless it enters the tissues. For example, a scratch or bite where virus-laden saliva enters into the bloodstream. This is why you never handle a bat with bare hands if you find one. But then you shouldn’t handle any wildlife without wearing gloves or having some protection.

There is so much more I could say but all in all bats are one of my favourite mammals. I love watching them come out at night. I love watching them get released back into the wild, to be free again after being rehabilitated from an injury or prematurely waking up during winter months. The chattering of their little voices when they are being released. Giving us heck or maybe calling to their other bat buddies, I’m home! The grin, full of teeth. Oh, they have teeth. But all they want is to be free to catch bugs have babies and survive in this difficult world.

Don’t be afraid of bats but do respect them. Call a wildlife rehabilitation facility if you find one injured or out of sorts. Never handle without protection. Always put in a sealed container with tiny holes for air. Make sure they can breathe! It may sound funny to say but they have come to Procyon in sealed containers, completely sealed, and in distress. They can slip out of small places no problem. But they need to breathe just like all living things. Poking tiny holes is all you need to do. Don’t feed or water, just get it to help. Call first and follow instructions and off you go. The wildlife rehabilitation facility will take it from there. Remember “bats are totally awesome. And we are very lucky to have them.

The Wonderful World of Bats