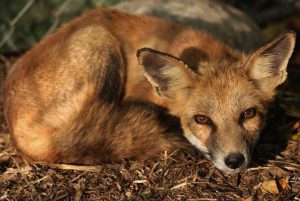 Our fox in Ontario is called the Red Fox which is mostly active during nighttime hours. Did you know that foxes have whiskers on their legs as well as around their faces, which they use to find their way. The fox tail makes up 1/3 of its total length.

Foxes have cat-like hunting behaviours and semi-retractable claws. The fox normally mates between January and March with a Gestation of 52 days.

The female (vixen) will then make one or more dens right after mating. The extra dens are used only if the original den is disturbed. Just slightly over two months after mating, the female gives birth to a litter of one to ten kits. The male brings the female food while she is caring for the kits. She will begin feeding her kits regurgitated food, but eventually she will being them live prey.