Here is a play by play of the FIRST SQUIRREL RELEASE THIS YEAR!

Sunday was indeed a very exciting day for myself and my husband, Peter.

Sammy, Colin and Elmer Squirrel were released on our property yesterday. Mounting a squirrel box high enough is no small challenge, and I must say this project was quite an adventure all in itself.

Being worried about safety, I debated for less high, so that we could separate out our extension ladder into two. While my husband said, “let’s go as high as possible.”

I figured, one person with the drill on one ladder, the other person with the squirrel box on the second ladder. I felt we needed to compromise some height for the squirrels, with safety for us. Well…. my husband’s position remained let’s go high; it will be safer for their home to be higher.

Sooooo…. the next question was, how do you carry a portable drill and a squirrel box up a ladder positioned that high? Well you don’t necessarily have to. Peter suggested hoisting the box up with rope. I felt that would not be safe for our precious cargo, without some sort of basket.

I was going to fashion a basket out of some old bed sheets, when I realised that a very large sturdy fabric shopping bag might do the trick, and it did! We inserted the nesting box into the bag, tied the handles together and then the rope around it. Peter climbed the ladder with the drill, and with one end of the rope, gently pulled the three dear hearts’ home up.

Much balancing afterward, many screws into the tree later, and the nesting box was finally up!

We got our lawn chairs out, and waited, and waited and waited…. One hour… two hours… three hours. Oh dear, we must have really scared them, mounting that box! 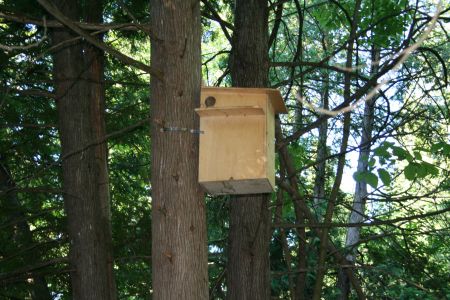 The first one to come out was either Elmer or Colin, and they both came out together briefly at one point but ran back in. An hour later, out came Sammy. He looked about, jumped on a branch and took off for the canopy above.

Within twenty more minutes, all three were out and frolicking in the tree tops, just like nature intended for them. Every so often back into their home for reassurance. It was so rewarding to see Sammy and his friends so joyous, and such a far very cry from when Sammy first jumped into my hand, in that dry dusty warehouse, dehydrated and lost.

Thank goodness Procyon Wildlife Volunteers were there to nurture these babies till they were old enough for release!

It was the most interesting afternoon we have spent for some time.

I have a great deal of respect and admiration for the volunteers at Procyon Wildlife. You are amazing because you give these beautiful creatures a chance to return to their natural environment. Thank you for all that you do, you are wonderful.